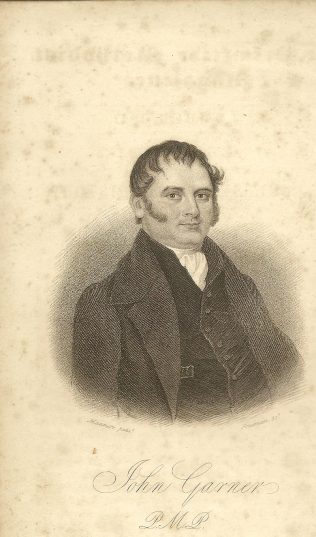 John was born on 13 February 1800 at Kegworth. His father, John, worked in a hosiery store and died in 1816. His mother was Elizabeth Chaplain (1770 – 1857). John’s father had a Baptist background and his mother was Wesleyan, although neither were known to be deeply religious. John was one of seven sons and three daughters.

John was apprenticed to a shoemaker in Kinoulton. It was there that he heard John Benton preach on 17 May 1817 and underwent a conversion experience. Two months and three days later he became an exhorter and appeared as a local preacher on the Feb-May 1818 plan. At the same time James Bonser was converted. Kendall records that John and James provided protection for Thomas Jackson in a time of persecution at Kinoulton.

Kinoulton was somewhat isolated from Primitive Methodism in the early months after John’s conversion. He walked up to 20 miles on a Sunday just to hear a PM sermon. He often walked 8-10 miles after work to attend meetings and travelled several miles to class meetings.

As a young man, John was described as a spring of fun and frolic and very much enjoyed a practical joke. This spilled over into his ministry.

John became a travelling preacher in 1819. He is recorded as having a magnificent preaching voice, with distinct pronunciation and good carry. His brother, William, on hearing him for the first time wrote that John preached a sermon of wonderful fluency and power.

John suffered persecution, as did other preachers of his time. He visited Sow in 1819 and was driven out of the village, pelted with stones, rotten eggs and filth. Attempts were made to pour sludge down his throat. He was knocked down, kicked and beaten, dragged to the pond and threatened with drowning. He was rescued by one of the worst persecutors, who obviously thought things had got out of control, and escaped.

On occasion he was accused by a society member of being lax in his visitation. His repost was to rise very early in the morning and pay a surprise visit to the complainant. As the door is opened by the householder still in nightclothes and with a lamp, he greets him and immediately entreats him to join in prayer.

In September 1826, at the age of just 26, John was made superintendent of the mission to Cornwall. He records that in a period of 10 months more than 600 people united with the PMs in Cornwall.

Sadly, the harsh life of a travelling preacher affected John’s health and he had to superannuate in 1848 suffering from asthma.

John was a gifted administrator and recognised leader. He was one of the ministers named as a permanent member of conference in the Deed Poll.

John was the first Secretary of the General Mission Committee, appointed in 1843. He was succeeded by his brother, William.

John married Mary, daughter of Simon and Jane Kemp on 19 November 1822. Mary was born at Burstwick in 1797 and died on 10 March 1833. John and Mary had four children. Two died in infancy.