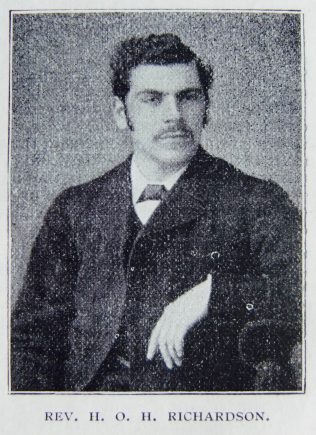 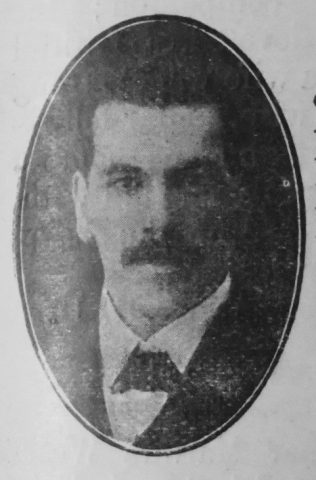 The desire of the sons of the prophets at Jericho to seek the translated Elijah possessed some of us when we heard that Harley O.H. Richardson “was not.” It was so sudden, and so difficult to believe he had gone from us.

Born at Stockton on August 23rd, 1867, he was early impressed for good. At fourteen he gave his heart and life to God and soon was made class leader, then local preacher, and then the advice of the Rev. J. Day Thompson, he offered himself as a candidate for the ministry. He passed his examination in 1888, but there being no room in the College, he spent twelve months as H.L.P. on the Oswestry Station. The following year he entered College, and in 1890 was stationed to Leeds III. After spending the whole of his probation there, on the division of the Circuit he was asked to take charge of new Renoboth Central Mission. He toiled earnestly in the establishment of that Mission but the strain told on his health, and after eighteen months’ strenuous service he had to relinquish the task owing to severe nervous breakdown. Bravely did he hear his affliction, from the effects of which he suffered ever afterwards, and by God’s blessing, under the careful nursing of a devoted wife, he sufficiently recovered to go to Hull V. in 1897.

Here he spent eight happy and useful years, five as second preacher and three as superintendent. The fruits of his labours in Hull are permanent, not only in larger buildings and new causes, but most of all in the hearts of the people to whom he ministered.

In 1905 he came to Darlington and speedily gripped the town and won the affection of his flock.

For two-a-half years he put in earnest labours, always planning for great things and securing the heartiest co-operation of the churches. It is no small testimony to the work and worth of our friend that the whole of his seventeen years’ ministry was spent on three such important circuits. He came also into Connexional prominence, being elected Temperance Secretary at the Conference of 1906. To this work he gave careful and devoted attention and was busy at the time of his death with many schemes for its consolidation and advancement. He was cut out for high honour in his Church and would have worthily occupied the highest positions.

He was an excellent preacher. It was his greatest joy to declare the “unsearchable riches of Christ.” His fine presence, genial face, beautiful voice, attractive style and earnest delivery gave his message peculiar power. He was a good man, living in close touch with spiritual things, and by his personal influence witnessing to the truth of his message.

He was a kindly soul, a true “big brother” to all his friends. The “Guild of Kind Hearts,” through which he influenced for good so many boys and girls of many ages, was the natural product of a large heart. To know him was to love him. He was blessed in his home-life, being helped in his many activities by the love of his wife and children. To the business life of his circuits he brought an inventive mind, a keen administrative ability, and a gentle though firm manner. He had the literary gift in no small measure and used it largely for the good of his Church. He was faithful in his ministry, loyal in his friendship and brotherly as a colleague.

Just as his day was drawing to its noon-tide he was taken to the higher service. On February 5th, 1908, after speaking at Aycliffe on “Africa,” he cycled home, and during the night a severe cold that for some weeks he had tried to work off prostrated him with pleurisy. This rapidly developed into pneumonia, followed by heart weakness, to which, after a brave struggle, he succumbed on Tuesday evening, February 11th. We laid him to rest on Saturday, February 15th. A largely attended service, including the Mayor and the Vicar of the town, was held in Greenbank Church, conducted by Rev. C.R. Dalton. Beautiful testimonies to the life of our brother were given by two of his old friends, Revs. J. Bradbury and M.T. Pickering.

Others taking part were Revs. T. Mitchell, A. T. Guttery, R. Harrison, A. Jubb, and G. Bennett. The remains were conveyed to Stockton, where the committal service was taken by Revs. M.P. Davison, C. Humble, and W. Bowe. The following day an impressive memorial service was held in Greenbank Church, addressed by Revs. T. Graham and C.R. Dalton. Through the mysteries of life we look for the unfolding of God’s will. Our brother lives in many hearts here: he is with God yonder. May the sorrowing widow and children be divinely comforted in the time of their bereavement. In the morning of the Eternal Day we shall meet again.

Harley was born on 23 August 1867 at Stockton, Co. Durham. His mother, Catherine, was a widow and inn-keeper at the time of the 1881 census.

He married Elizabeth Ann Birkbeck (1866-1940) in the summer of 1894 at Stockton, Co. Durham. Census returns identify three of four children.