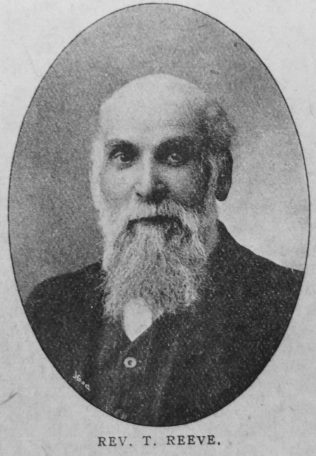 The passing of the Rev. Thomas Reeve, of Leighton Buzzard, took place on August 16th, 1926. Had he lived ten days more he would have reached the ripe age of four-score years and one; and this, not by reason of physical strength, of which he could never boast of much reserve, but as seems most probable because of the strength of his spirit. The end which was expected by many in his forty-first year did not come until the eighty-first. Born in 1845 of lowly but good parentage, his earliest religious associations apart from his home, were with the Anglican and Baptist Sunday Schools. Necessity compelled him to work in the fields of a neighbouring farmer when only nine years of age at 6d. per day. At the beginning of the teens he was with an uncle who was in the leather trade; at fourteen he was working on the railway, attached to a gang of platelayers, and while thus engaged one day in Primrose Tunnel, near Euston Square, narrowly escaped death, his companion being  killed at his side by a passing express.

His first contact with the Church he subsequently so faithfully served was at a class meeting, where he found happy fellowship with some very worthy people, who helped him greatly to understand the deep things of the spirit. Within three months he received his note of authority to preach, and thenceforward was everywhere heartily welcomed to our pulpits and services. He was encouraged by that counsellor of eager youths, Rev. Dennis Kendall, to take steps to prepare himself for the wider ministry, and in 1862 he entered Elmfield College, which at that time was under the influence of the wonderful personality of John Petty.

His all too brief, but very successful ministry, was exercised at Poole, Dorset, two years; Basingstoke, two years; Forest Hill, one year; Bedford, two years; Peterborough, two years; Bradfield, Berks, five years. The cause at Bradfield had a great quickening during our brother’s term, and has never looked back since those days. Unfortunately, after accepting the Supertendency of his home station, his health, never robust, gave way and he was compelled to relinquish the work he loved, and settled in Leighton Buzzard. For some years he was greatly afflicted, but later, having regained a limited measure of health, he revealed in manifold ways his devotion to the Lords work. For many years he was Class Leader and Society Steward, and for a short while Circuit Secretary. It was however, in his ministry to the sick and aged that he revealed the grace and gentleness of spirit which inevitably reminded men and women of Christ. Some said he was a ministering angel, some stooped to touch the hem of Christ’s garment, so near did he bring the Presence to the hearts of those who most felt need of Him. He is sorely missed. We cannot but rejoice at his gain. He lived so nobly that everyone knows that his would be an abundant entrance into the city of love and light. Our tender sympathy is offered to the sister who survives him after year’s of intimate fellowship, to brothers long resident on the other side of the Atlantic, and other relatives and friends, who cannot fail to know a sense of impoverishment now that he is gone.

After a largely attended service in Leighton Chapel, conducted by the writer, that which was mortal of him was tenderly laid to rest in the local cemetery, but he is not there—he is risen.

Thomas was born in 1845 at Leighton Buzzard, Bedfordshire.

Thomas married Lydia Adelaide Wallis (abt1845-1907) in the summer of 1872 in the Newbury Registration District, Berkshire. Census returns identify one child.