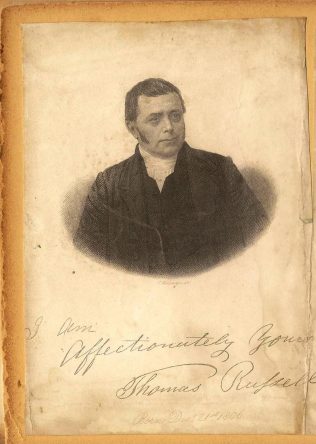 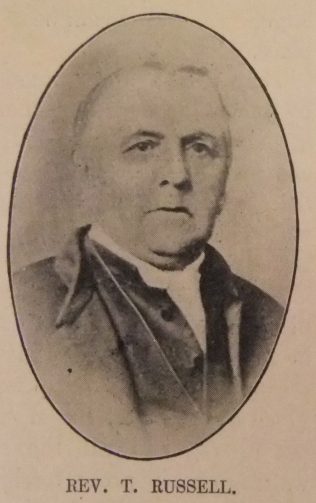 Thomas was born 21 December 1806 at Kinderton cum Hulme, Cheshire and was baptised on 18 January 1807 at Middlewich, Cheshire. His parents were Richard Russell and Charlotte Moors. Richard died whilst Thomas was quite young and his mother remarried and found religion. Thomas, aged 12, attended the first PM Prayer Meeting at Middlewich with his mother. Thomas Jackson preached. It was some years before Thomas felt his conversion, but at the age of 18 he made his first attempts at preaching. He made a move to Congleton in 1826, where he preached his trial sermon. In 1827 he moved to Bemersley to be closer to the Bourne brothers.

In the autumn of 1829 Thomas started his mission to Berkshire. The first society formed was at Upper Lambourn. By the December Quarterly meeting total membership over several small societies was 48. John Ride was appointed at that meeting as circuit superintendent. Both John Ride and Thomas Russell worked hard over the winter months but suffered many persecutions and little hospitality. They met in February 1830 for a consultation and moved into a nearby wood to pray. They pleaded with God to give them Berkshire. After some hours they received God’s assurance and Russell sprang to his feet, pointed across the country and exclaimed: ‘Yonder country is ours, yonder country is ours, and we will have it.’ That proved a turning point and within three years there were nearly thirteen hundred members.

All did not go smoothly. At Chaddleworth in May 1830, under the pretence that he had sold hymn books and magazines without a licence, Thomas was arrested and brought before the magistrate. The sentence was to either give up preaching there or pay a fine of 10 pound. Thomas refused to do either and was committed to Abingdon Jail for three months with hard labour. Even illness after a month did not bring relief when the doctor ordered him to do 10 hours at the wheel daily. An application to the Society for the Protection of Religious Liberty by other ministers in the town secured his release.

In April 1831, Thomas was appointed to commence missionary operations in Hampshire. Again there was frequent opposition. At one village, Hurstbourn Tarrant, opposition was so severe that he would probably have been assaulted had he not been accompanied by a well- known pugilist from Coomb. At the June Quarterley Meeting, Miss Smith was appointed to assist him. Their professional relationship developed in marriage in 1833.

Thomas continued to be moved regularly by the connexion. In 1839 he was involved in a mission to Weymouth. Later he had spells in the Channel Islands and Ireland

When he had retired to Dover, Thomas had a Primitive Methodist Chapel built next to his home at Maxton, on the outskirts of Dover, called the Maxton Tabernacle.

Thomas was a prolific writer, keeping a journal of his labours and later writing of his experiences. He wrote the following:

He married Elizabeth Ann Duke on 10 July 1839 in Weymouth. She was born on 3 January 1808 in Portland and died on 30 March 1848. Thomas and Elizabeth had three daughters.

Thomas died on 3 Jan 1889 at Dover and is buried at Englesea Brook.