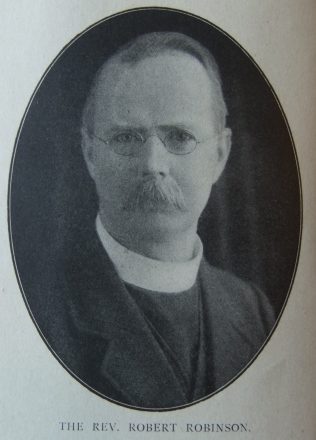 Robert was born in 1869 at Barlow, nr Gateshead, Co Durham, to parents James and Elizabeth. James was a labourer.

The 1891 census gives Robert’s occupation as an engine drive at works.

His obituary records that Robert was a keen student, a fine preacher, and a good and loving pastor. He disliked being caught up in the organisation of bazaars and efforts which interfered with his essential call to preach and save souls. His early experience in the mines of the North gave him sympathy and understanding with the working man, and an appreciation of the advantages of education. He worked hard to equip himself to reach the stage where he could take lectures at Durham University.

His later years were spent at Amersham, where despite his ninety years, he was a sprightly, good-looking, youthful personality.

Robert married Sarah Edith Simmonds (1877-1957) in the summer of 1901 at Woolwich. Sarah was the daughter of Rev Mark Simmonds. She was English tutor at Stonygate College, Leicester, at the time of her marriage.  Census returns identify two children.