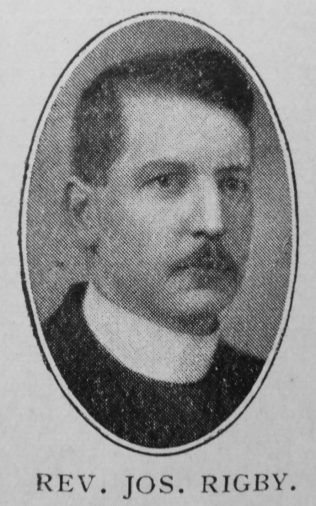 JOSEPH RIGBY: born at Abram, near Wigan, April 6, 1883. Converted as a youth, he soon gave promise of usefulness and became an effective local preacher in the Leigh Circuit. In 1903 he entered Hartley College, and two years later was sent to the Thornley Circuit, where he spent his four years’ probation.

In all his circuits he won the admiration and affection of the people by his untiring devotion and unselfish service. He loved preaching, but his ministry was not confined to the pulpit. He had warm, human sympathies, and he would go anywhere to help those in trouble. He was as tenderhearted as a child, and the sufferings and hardships of the unemployed stirred him to the depths. He was ever ready to champion the cause of the unfortunate and the oppressed.

He wore himself out in the service of others, and passed away on August 16, 1934. He has left behind him a record of faithful and fruitful toil, and memories that are an inspiration to those who knew and loved him.

Joseph was born on 6 April 1883 at Abram, nr. Wigan, Lancashire, to parents Thomas, a coal merchant, and Betsey.

He married Annie Stephenson (b abt1884) in the summer of 1909 in the Wigan Registration District, Lancashire. The 1933 Methodist Who’s Who identifies that they had a daughter.