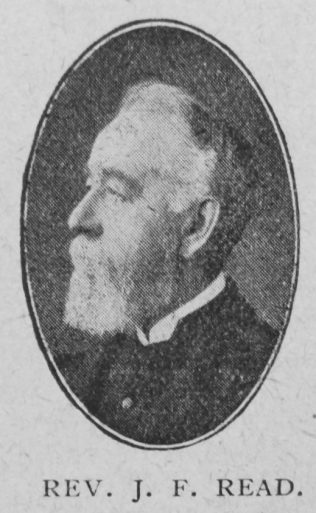 The Rev. John F. Read was a choice spirit. The strength of a holy purpose, the vision of a pure soul, and the loyalty of a whole consecration made him this. He delighted in the ministry of the Church, and, as long as he was able, faithfully discharged its duties. For thirty-eight years he rendered splendid service. He knew the arduous toils of the country circuit and even in his last years did not shrink from them. The fact that he spent three terms on one circuit, and two on another is a fine testimony to the helpful character of his ministry, and the high esteem in which he was held.

An incident is recorded which is a witness to the effective nature of his preaching. He enquired of a man one day why he had absented himself from the services for some weeks, and the reply was, “I find I must either stay away when you preach or lead a better life.”

When at Scunthorpe the town church was destroyed by fire; and the present church in High Street erected. He came to Soham in 1898, rejoicing to be near Cambridge, his native town, and where his aged father, the late Mr. John Read was then residing. For three years he gave his best to his last station.

Symptoms of throat paralysis compelled him to superannuate in 1901. He settled at Cambridge. Never was he so happy as when he was able to attend the public services. He did all he could and gave the same to the Church in St. Peter’s Street, and later to the new church in Castle Street. Though preaching was almost an impossibility to him he was able to serve as a member of the Chesterton Urban District Council, and was overseer for the Parish of Chesterton at his death.

His last public act was to pay a tribute at a memorial service to the oldest member of the Castle Street Church, one whom he had known as a fellow Sunday school scholar, and an active worker in the Church for many years.

For some time his health had been failing; and on Wednesday, June 5th., he was taken ill in his garden. At first it seemed as if he could not live through the night. He rallied, however, but nature was spent, and on the morning of the 11th., he ascended. He had no fear of death, believing with all his heart in the reality of the heavenly life.

The Revs. J.H. Rose, J.B. Hardy, B.A., and W. H. Curtis representing the General Committee, and the Lynn and Cambridge District took part in the funeral service, and on June 16th., in the Castle Street Church the Rev. J.H. Rose paid a warm tribute to his worth.

John was born on 22 November 1843 at Cambridge, Cambridgeshire, to parents John Read, a coach maker, and Mary Kettle. He was baptised on 18 December 1842 at Castle Street methodist, Cambridge.

He married Rosa Anne Garton  (abt1844-1933) in the summer of 1869 in the Sculcoates Registration District, Yorkshire. Census returns identify two children.