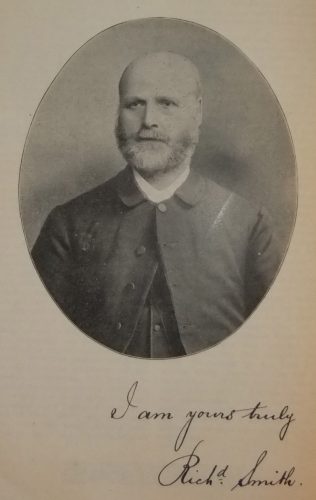 Richard was born on 8 March 1840 at Wistantow, Shropshire. He was orphaned early. His father died soon after his birth and his mother a few years later.

In 1851 Richard was in the Union Workhouse at Church Stretton, Shropshire. In 1861 he was working as a tanner.

Richard was converted aged 17 at Edgton Chapel in the Bishops Castle circuit. He joined the PM church at Hordesley and was soon a local preacher.

As a preacher, Richard was soundly evangelical, and always practical. He was clear, earnest, definite in his aim of edification of believers and the salvation of the ungodly.

As a pastor he was diligent, systematic, sympathetic. As a businessman he was methodical, punctual, careful as to details.

Richard superintended the erection of nine chapels and one minister’s house.

He was Secretary to the Bristol District Committee for several years.