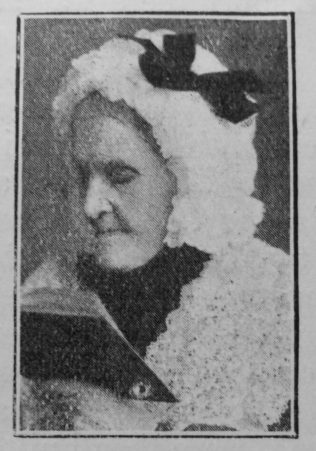 Transcription of Obituary in the Primitive Methodist Magazine by P.K.

By the death of Mrs Russell on Monday, March 4th, 1907, Maxton has lost a benefactress indeed, and Dover Station one of the most loyal and devoted of its supporters. Mrs. Russell was the third wife of the late Rev. Thomas Russell, one of the co-workers with Messrs. Hugh and James Bourne. The character and work of the Rev. T. Russell are well known. His marvellous labours, his untiring zeal, the splendid pioneer work which he did in the Midlands, Berks, Hants, the Channel Islands, and the North of Ireland, as well as his imprisonment with hard labour at Abingdon for wayside preaching – these things are all stamped indelibly upon our history. The greater part of this work was done when he met the late Mrs. Russell in Ireland, but she brought to the church a zeal equal to her husband’s, and smoothed his closing years with an unremitting ministry of care and tenderness.

Her training fitted her in a splendid way to be a companion for such a devoted servant of God, and to carry on the work when he was called home.

Mrs. Russell’s maiden name was Barnsley. She was a remarkable woman, and came of a notable family. On her father’s side her descent is traced from Edward I., and on her mother’s side from the French Huguenots, one of her ancestors on that side being the Rev. John Rogers, who for his faith was burned at Smithfield, in the reign of Queen Mary. Her parents resided at Lisburn, where she was born on October 20th, 1815. She was educated at a boarding school at Carrickfergus, obtaining in addition to a sound education, skill in fancy needlework. Soon after leaving school she was influenced by a religious revival at Belfast, and undertook Christian work amongst the girls in the embroidery school at Donaghadee, where she regularly read the Scriptures to the girls, and gave them useful instruction, extending these labours subsequently to the factory girls in the same place.

Some years later she had to leave Belfast, to live with her mother. At this time the Rev. T. Russell was introducing Primitive Methodism in that district, and to this work Miss Barnsley gave whole-hearted assistance. When Mr. Russell left Lisburn there was an engagement between the two, the marriage, however, being delayed for nine years, owing to Miss Barnsley’s devotion to her mother, with whom she remained until her death in 1867. She was married to Mr. Russell at Newry on the 8th of January, 1867. They came to Dover in 1872, to take charge of the station. The active ministry of Mr. Russell was nearly over, for in 1874 he was superannuated, and entered on a well-earned rest.

It was then that they selected Maxton as their place of residence. Here they built a house, started a cause, built the tabernacle, gathered a congregation, established a Sunday School and a Band of Hope. The death of Mr. Russell in 1889 did not arrest the work at Maxton. Mrs. Russell took the work in hand all the more vigorously, ably aided by her step-daughter, the late Mrs. Vaslet and Miss Vaslet. In 1903 she provided at her own cost a lay missionary, and has maintained him ever since.

At the suggestion of the present superintendent she enlarged the meeting house, fitting it up with every convenience. The advancing years taught her that her share in the work must soon come to an end, yet her ideas were all for continuity. Bright, hopeful, and enthusiastic as ever, her plans were for the future, the remembering that:

“The workers die and are forgot,
But work for God it dieth not.”

With that object she purchased Maxton House – a well known mansion in the neighbourhood, her idea being that on the ground on the west side a new church should be built. The ground was conveyed to trustees for this purpose, and £200 invested to help the building operations. The death of Mrs. Russell leaves that project in the initiatory stage, and whatever may be the ultimate result, it affords strong proof of her devotion to our church, and her loyal desire that the memory of her husband should live in a Russell Memorial Church.

After a very brief illness she fell asleep on Tuesday, March 9th, at the ripe age of ninety-one years. The Memorial Service was conducted in our London Road Church by the Rev. Peter Kay; the building was filled with relations and friends. The Rev. A. Jepson, the vicar of the parish who was present and who had expressed a wish to take part in the service, said that when he came to the parish seven years ago he had received the warmest welcome from their departed sister. She had been wonderfully energetic, and had been patient and kind to all who had come into contact with her. He hoped that her memory would be consecrated and sanctified in the hearts of all believers in Dover. Mr. Hobson said that a fitting epitaph of their dear sister would be: “Beloved, respected, lamented.” Alderman Martyn Mowll said that the deceased lady was great in her simplicity. She was sincere, kind, and loving. She had set a true example to all around her.

The remains of Mrs. Russell were removed to Crewe on Monday. A service was conducted in the Heath Street Chapel by the Rev. T.J. Gladwin, assisted by Revs. Dodd Jackson and A. Tucker. The funeral then proceeded to Englesea Brook, and in the same grave that contained the mortal remains of her husband the body was laid. And so another life well lived had come to its mortal close, a life which in all its details authenticated the power of the Gospel of Grace to transform and keep. May the spirit of her life continue to live in all whose privilege it was to know her.

I have not been able to identify Hannah’s parents from online records.