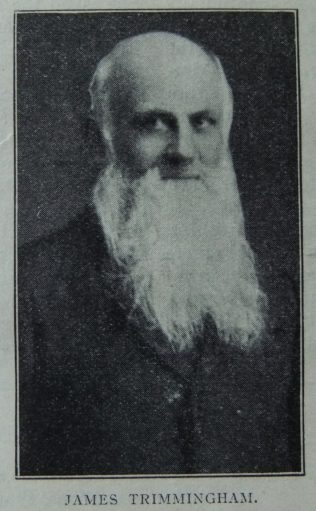 Transcription of ‘Sketch’ in the Christian Messenger in the series Typical Primitive Methodists by Rev. Arthur Jubb

A MAN MIGHTY IN PRAYER.

A working man – who for many years has had family worship three times a day, and whose power in prayer is akin to that of the great saints – deserves recognition as one of the builders of our church. He is a mystic of the finest type. At almost every crisis of his life, and many times when at prayer, he has heard the Divine voice speaking to him, and now he ascribes his salvation to his obedience. His heart has been strangely and deeply stirred at times by the Divine touch, and to hear him shout, “Hallelujah! ” is to be thrilled to the deeps of the soul. Such a man is James Trimmingham, a class leader at Great Thornton Street, Hull.

It was through great wrestlings and tumults that he entered into the kingdom. Born of Christian parents (August 7th, 1840, at Fishlake, in Doncaster Second Circuit), he was converted when nineteen years of age. Unfortunately he fell from grace. Removing to Hull a few weeks after conversion, he was taken – by a Primitive Methodist- to an unchristian home to live. This led to his downfall, and for eight years he lodged there, a stranger to vital religion, though often visited with feelings of concern  about his soul. He then made the acquaintance of Miss Parker (sister to Rev. G. Parker,) and whose brothers, Charles and William, have rendered great service to our Hull churches), and with her began to attend our services. The Spirit of God strove mightily with him. At Great Thornton Street chapel, when Thomas Walmsley was the preacher, he was so moved that if a verse of the hymn had been repeated, he would have had to cry out for mercy. On another occasion, when Thomas Newsome told the story of the Filey fishermen and their heroic Christian conduct in a storm, he was so stirred that if anybody had spoken to him he would have been saved that night. He stuck to his seat, and felt as if he could not leave the service. He got away, however, and the day decision was postponed. Shortly afterwards he married, and one Sunday evening, in 1871, after Rev. Robert Harrison had preached a powerful sermon, he decided for Christ. He left his pew, and before he was half-way down the aisle, his long-imprisoned soul leaped into liberty. That was the first of many victories which his soul obtained.

At that time he worked on the dockside amongst hundreds of men, where only three Christians were to be found. When on night duty two of them would sing hymns others joining in the chorus. Some fellows of the baser sort tried to get this hymn-singing stopped, but the foreman said, “Let them sing; as long as they sing, I know the work is going on.” In a short time quite a number of the dockside labourers were converted, as many as eight Christian men working together in the hold of one vessel. But there was much opposition. One man, named Thomas Frost, said to him, “No man can be religious on this dock-side.” “Oh, yes, he can,” answered our friend, and at once he invited his workmate to class. He went, and three weeks after was converted, and in time became a local preacher and Sunday school superintendent. Another would break out in cursing whenever he was near him, but at family prayers this swearer was pleaded for, until the wrestler heard a voice, saying in his soul: “ As I have overcome, so shall ye overcome.” Believing, he shouted, “Hallelujah! ” And in due time the victory was won. ’

During those years he worked hard as a soul-winner. He aimed to get a new man to his class every week, and with such success that in a short time the class grew from fifteen to sixty members. Nearly everyone brought was converted.  On one occasion he specially prayed for a notorious sinner who had promised to come to class, and while praying received the assurance, “He shall be there.” At the seven o’clock prayer-meeting he told the members this man would be at class, but a relative expressed his great doubts. However, the leader met the man according to appointment, and he went to class. In passing, may we ask if any better way of securing converts and members for our church has been devised than this? A few men like this in every Circuit, and unexampled success would crown our labours, and the Lord would add daily to our churches such as should be eternally saved. Often the Lord used his servant in strange ways. He worked for years with one man, who would always be with him if possible. For his salvation he continually prayed. On one occasion he spoke to him about not doing his work properly, and the man answered back violently. James Trimmingham was wounded and tears fell from his eyes. His workmate saw the tears, and his heart was broken, and on the next Sunday he yielded himself to God, and continues to this day an earnest and devoted Christian in the same church as our friend.

In his life have been many hardships. During the years he worked on the docks there have been occasions when there was no bread in the house. At one time he was ill, with wife and several children dependent on him, and they were so reduced that there was not even a crust in the house. He went into his room, and read in Isaiah the story of Hezekiah’s sickness and recovery – the words “I will add unto thy days fifteen years’ being specially impressed upon his mind. As he laid on his couch, he poured out in prayer the tale of his distress, until the peace of God filled his soul. Within an hour and a half a good old Christian came, his words of cheery greeting being: “The Lord has sent me here this morning!” He gave the sick man half-a-crown, which meant food for that day and the next. The next day his father came to see him, and brought with him food and money sufficient for a fortnight’s needs. Answers to prayer, both for things spiritual and temporal have been in his life abundant.

Living in one house, the woman next door could hear him pray, and it made her miserable. She asked the landlord to turn him out. He was a Wesleyan, and said: “I dare not turn him out. He is a good man and a good tenant.” The woman would sit with the poker in her hand, stirring the fire and making all the noise she could to drown the voice lifted up in prayer. A few weeks afterwards she left, unable to bear the prayers of her godly neighbour. On another occasion he was sent for by a dying Roman Catholic, and had the joy of leading him to trust and peace in Christ.

And beginning on Monday morning he prays every day during the week for the preachers appointed for the following Sunday. Who can say how much the church owes to such fervent prayers?

James was baptised on 9 August 1840 at Fishlake, Yorkshire. His parents were William, a tailor, and Sarah.

James died at Hull, Yorkshire. His death was registered in the third quarter of 1917.

Note: The records show different ways of spelling the surname; some with one ‘m’, some with two.