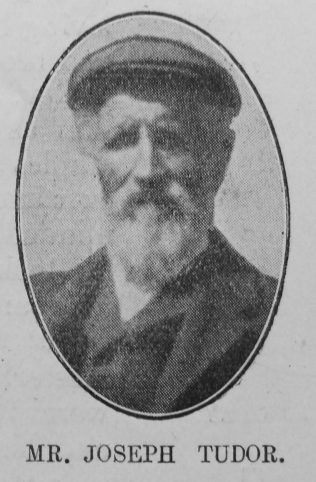 Joseph Tudor, of Rose Hill, Stoke-on-Tern, Salop, entered into eternal rest, August 19th, 1909, in the sixty-second year of his age. He gave his heart to God in 1882, and soon after became a local preacher in Market Drayton Circuit. After some years he removed to Wrockwardine Wood Circuit, where he for a number of years entered heartily into all the activities of church work as a local preacher, and did excellent service. From thence he went to live in Bishop’s Castle Circuit. While there his Christian life, and the services he rendered in that district, won for him the affection and respect of the churches.

W.A. Pugh, J.P., the Circuit Steward, says of him, “That he was a faithful workman in the Church of Jesus Christ, had the courage of his convictions, and would never swerve from what he believed to be right ”

Two years since Brother Tudor returned to Market Drayton Circuit, and took up his abode at Stoke Heath. At this place he entered into the work of God and rendered good service. Here his health very soon failed, and he became too feeble to take any appointments on the plan except at Stoke Heath.

A few days before he died he felt that the end was drawing nigh, and expressed himself to that effect to his wife and others. On the day of his death, when quite conscious, he said to his wife, “There has come over my eyes a mist, and I cannot see you,” and then began to sing the hymn, “When the mists are rolled away,” etc. Thus died a faithful servant of God.

Joseph was born abt1847 at Stoke on Tern, Shropshire, to parents Joseph, who worked the land and Sarah.

He married Louisa Frost (1850-1933) in early 1896 in the Stoke on Trent Registration District, Staffordshire.