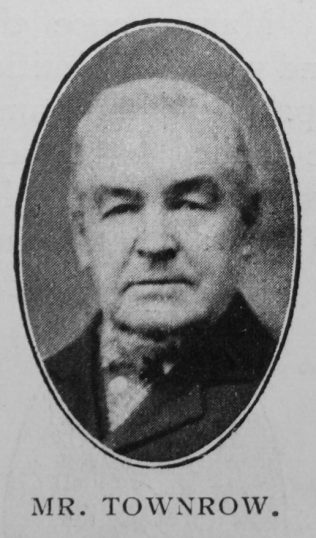 Transcription of obituary published in the Primitive Methodist Magazine by R.C.

Retford Circuit has lost an old and honoured worker by the decease of William Townrow, who “went home” on the 28th of July, 1911, aged seventy-eight years. His mortal remains were interred the following Tuesday at the Retford Cemetery, by the side of his dear wife, who pre-deceased him about a year.

Brother Townrow was converted in early manhood at a cottage meeting held at Barnby Moor, and shortly after opened his own home at Ranby, four miles from Retford, for services. From that time right on to the end he has been actively associated with the work of God in the Retford Circuit—first as leader of the Society formed in his own home. then as local preacher, and for the last thirty-four years as leader of the Sunday afternoon class at Retford.

For many years Mr. and Mrs. Townrow were caretakers of our Carolgate church and schools, and better servants in that capacity no church ever had. The work of cleaning and dusting was done as “unto the Lord.” It was good to see them engaged even in the lowliest work belonging to their office. One said, who knew them and their work well, “They loved the very bricks and boards of the place!”’

Brother Townrow has been failing in health since the departure of his dear wife, but was able to get to the services of the sanctuary and attend to his duties as class leader until a week or two before the end. He leaves a family of seven sons and two daughters. They do not inherit a great deal of worldly gear from their parents, but, what is far better, a good name and inspiring memories. When the purposes of the Heavenly Father are completed, may they be “an unbroken family around the throne.”

William was born abt1833 at Kneesall, Nottinghamshire, to parents Henry Townrow, who worked the land (1841), and Hannah Warsop.