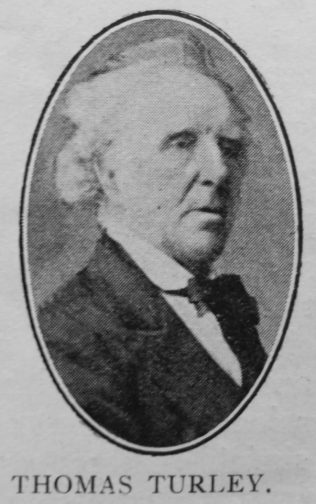 On Sunday, October 24th, 1909, there passed away one of the oldest Primitive Methodist Local Preachers, Thomas Turley, the father of Rev. Josiah Turley. He was born in 1818, and when quite young was brought to the Lord through the instrumentality of the early Primitive Methodist Missionaries.

He became a local preacher before he was twenty years of age on the Kidderminster Circuit, and remained on the plan to the end of his life. He devoted himself to the cultivation of his mind, and being blessed with a wonderfully retentive memory, he acquired large stores of Scriptural and general knowledge, so that his public services were highly appreciated.

He has not been able to preach for several years on account of failing sight and increasing deafness, but maintained a lively interest in the prosperity of Primitive Methodism.

In May he left his native home in the valley of the Severn, near Bridgnorth, and went to live with his son in Southampton. Four days before his decease he was taken ill, and gradually became weaker, until without a struggle he fell asleep in Jesus in his ninety-first year, having been a local preacher over seventy years.

His mortal remains were laid to rest by the grave of his departed grandson, Rev. Thomas James Turley.