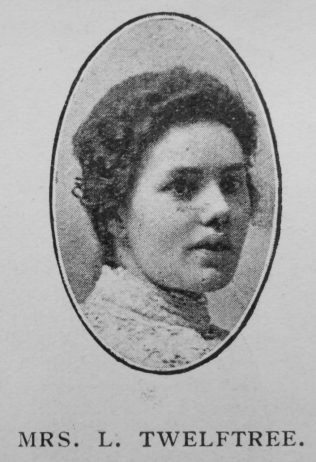 Transcription of obituary published in the Primitive Methodist Magazine by R.J. Fenwick

Mrs. Lottie Twelftree was but thirty-one years of age when she entered into rest, May 28th, 1911. The daughter of Mr. and Mrs. G.B. Abel, of St. James’ End, Northampton, from childhood she had been associated with Primitive Methodism. At fifteen years of age she was converted under the ministry of Rev. S.R. Woodall. Soon after she sought to work for Christ—in the Sunday School as teacher, in the Christian Endeavour as secretary, in the choir as singer and assistant organist.

On her marriage to Mr. Isaac Twelftree, seven years ago, she came to reside at Rushden, in the Wellingborough Circuit, and worked in church, school, and Band of Hope. At the time of her death she occupied the positions of teacher and treasurer of our Sunday School, and corresponding secretary of our Christian Endeavour Society.

Her passing away was sudden, and deep sympathy is felt for the bereaved husband and the two little ones. The interment took place on Thursday, June 1st, in the Rushden Cemetery, the officiating minister being Rev. R.J. Fenwick, who conducted an impressive memorial service the following Sunday evening.

Charlotte, known as Lottie, was born in late 1879 at Waddesdon, Buckinghamshire, to parents George Benjamin Abel, a journeyman tailor (1881), and Charlotte Bull.

Before her marriage Lottie worked as a tailors (1901).

She married Isaac Twelftree (1867-1957), an inspector of boots (1911), in the spring of 1904 in the Northampton Registration District, Northamptonshire. Census returns identify two children.

Lottie died on 28 May 1911 at Rushden, Northamptonshire.