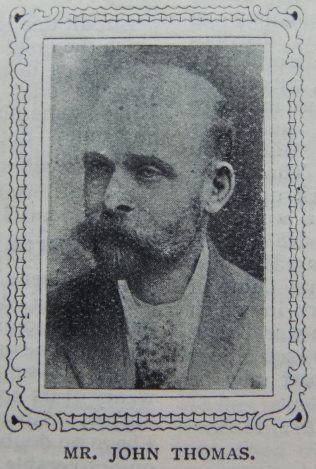 Mr John Thomas can speak of a life-long relation to our church and Sunday school at Sowerby Bridge, for his father was a valued worker here for fifty years. In early life our friend put on the harness, and has never been one to think lightly of his responsibilities in the service of the church.

Of a retiring disposition, much of what he does is known only to God and himself. His is the life that asks for no reward save “the reward of doing good.”

For upwards of twenty-five years he has filled the office of society steward with devotion and efficiency. These years have not been without their trials and difficulties have not been altogether absent but through all these our friend has stood by the cause, and to-day he has the joy of knowing that his labour and sacrifice have not been in vain.

Like others, he feels that he has not reached the ideal in these busy years, yet his is a work which has done much to make possible greater success in future days.

In the various departments of work – as steward, Sunday school secretary, organist, etc., he has given valuable service, and always given it willingly and generously. Not the least valuable token of this kindness was the presentation of a silver Communion service to our society a few years ago, in gratitude to God and in memory of his parents, whom he greatly reveres. Mr. Thomas is a preacher’s friend, as a host of ministers and laymen can testify, his home and his resources being always available in the interests of Primitive Methodism, which is to him the first Church in the land.

I have not been able to unambiguously identify John based on the information in the sketch. He was possibly born on 23 July 1856, to parents William and Jane, died on 30 August 1908, and worked as a joiner and cabinet maker. Can anyone confirm this?