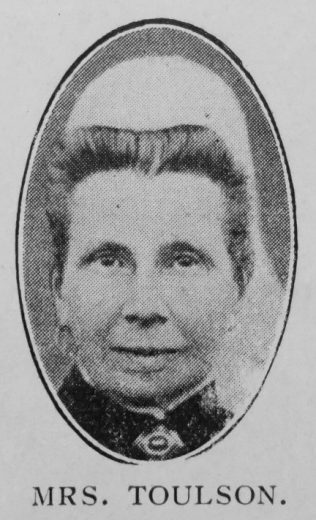 One of the choice and elect spirits of the earth has been translated to the Father’s house by the death, at a serene old age, of Mrs. Mary Ann Toulson, widow of the late Rev. Joseph Toulson (ex-President of Conference and ex-General Book Steward). Hers was indeed a beautiful life. She had the good fortune to be well-born, for she was the daughter of the venerable Rev. William Sanderson, the Chrysostom of our Church, one of its great natural orators, of whom it was said that his voice was “like a peal of bells.” Born at Alston Moor, in Cumberland, on July 6th, 1831, when she died on January 20th, 1912, she was in her eightieth year.

Soon after reaching young womanhood she married the Rev. Joseph Toulson, and for over forty years they enjoyed a sweet and gracious wedlock. Through all his strenuous and most successful ministry she bore a modest, prayerful, and very effective part. Joseph Toulson proved to be singularly powerful and prosperous; he owed it in no small degree to the devoted lady at his side.

Mrs. Toulson was a model minister’s wife, sympathetic with all phases of Church life and activity, profoundly devoted to the great object of the Church’s existence; sagacious, circumspect, keenly alive to the interests of highest moment, yet not forgetful of the place and claims of more subordinate things, she ever bore herself through a busy and crowded life with great prudence and unswerving integrity. In her later years, and in the shadows of widowhood, her life was most exemplary. Down to the day of her death she was keenly solicitous respecting God’s work, eager to hear of its progress, and full of rejoicing at the evidences of its advance.

Though enfeebled with the passing of the years, she was yet a centre of quiet power and rendered fruitful help. She lives in the affection of a great host, but especially in that of her children and grandchildren who “rise up and call her blessed.”

Mary was born on 6 July 1829 at Alston Moor, Cumberland, to parents William Sanderson, a PM minister, and Mary Charles Shaw.

She married Joseph Toulson (1822-1890), a PM minister, in the summer of 1850 in the Glanford Brigg Registration District, Lincolnshire. Census returns identify two children.

Note: Online records suggest Mary was born in 1829, not 1831 as stated in the obituary.