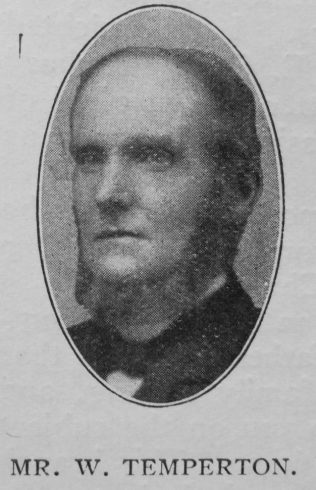 Mr. Wilson Temperton, of Hatfield-Woodhouse, in the Doncaster Second Circuit, passed peacefully and almost imperceptibly away on 2nd June last, at the ripe age of 79 years. He was born in the year 1831 at Belton, and was the second of a family of seven, one of whom was the late Rev. Charles Temperton, who for many years held an honoured position in our ministry, and died fifteen years ago. The brothers Charles and Wilson Temperton were converted the same night in a mission which was being conducted in the little Primitive Methodist Chapel at Low Levels, the latter of whom would at that time be about seventeen years of age.

At the time of his decease he had been a member of our Church for sixty-two years. After being in Doncaster for over twenty years and associated with our Spring Gardens Church, other associations also being with Hatfield and Fishlake, he came to reside at Woodhouse, and for the past twelve years was connected with our village cause there and was the chapel treasurer up to the time of his death.

The health of our brother broke up two or three years ago, and since then there was a gradual giving way and weakening of the earthly frame. For many days he seemed to dwell in a peaceful sleep, and then quietly slipped away into the keeping of Christ. He leaves a widow and son and daughter, with all of whom we sympathise in their loss.

Quiet in demeanour, unobtrusive in all his actions, kindly in all his ways, regular and devout in the services of the sanctuary so long as strength permitted, and with sustained interest in the village chapel so long as faculties were permitted to exert themselves—such was our brother, and his memory is precious. May his faithfulness, his kindliness, his goodness be an inspiration to those left behind, that they, too, may win their reward.

Wilson was born in 1831 at Belton, nr Epworth, Lincolnshire, to parents James Temperton, a farmer, and Mary Ann Wilson.  He was baptised on 1 April 1831 at Belton.