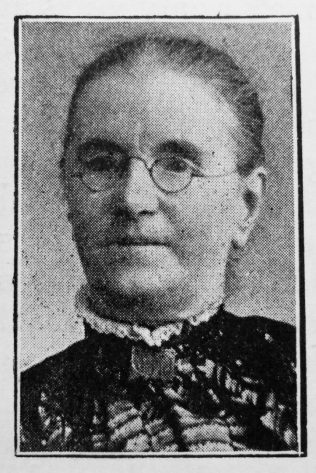 Transcription of Obituary in the Primitive Methodist Magazine by J.D.T.

This dear and loving soul passed to her reward on October 26th, 1905, at Blackpool, where she had lived for some twenty years. She was born near Hindley, Wigan, but could never tell the precise date or place of her birth, as her mother deserted her while she was but an infant, and she had to be cared for by the Poor Law Guardians. She was taken out of the workhouse as a nursery girl at the age of eight or nine, and so began, amid some cruelty, that strenuous life which she was to lead for more than sixty years.

At the age of ten she went to work in the cotton mill at Hindley, and then some twelve years afterwards to Tyldesley, where she was known as “Little Charlotte” – full of fire, and always ready to pray and speak, for she had joined our Church before leaving Hindley. In 1861 she was married to Mr. James Taylor, who worked in the same mill, and attended the same chapel. They left Tyldesley for Oldham five years after, and about 1886 removed to Blackpool. She was one of the founders of the Middleton Road Society in Oldham, which first of all worshipped in an old school at Cowhill.

While the chapel was building in 1869 services were held on Sunday evenings in Mrs. Taylor’s house, and among those who preached behind her table were Alderman John Hood, Revs. T. Whitehead (2) and D. Hanson Taylor, Mr. J. Holroyd and Mr. Anthony Spencer. She was in Oldham the leader of a large ladies’ class, and was a most diligent succourer of the poor. In Blackpool Primitive Methodism her name was long a household word. She was a woman of simple and genuine piety, and bore the protracted illness which brought on her death with great fortitude and faith. It was always a pleasure to visit her during that time. Until absolutely prevented she would insist on being taken to the services and class-meetings in her invalid chair. On her tombstone in Blackpool Cemetery we have placed this fitting verse:

“She hid the modest leaves between,
She loved untrodden roads;
Her richest treasures were not seen
By any eye but God’s.”

Charlotte was born in the mid 1830’s – as indicated in the obituary her parentage and date of birth were not known. However, her marriage record identifies her father as Thomas Ives.

In 1841, she resided in Newton Workhouse, Winwick, Lancashire and in 1851 she is described as a factory operative throstle piecer.

Charlotte married James Taylor (abt1837-1909) on 24 march 1861 at Tyldesley, lancashire. James was a roller coverer in a mill. When they moved to Blackpool they ran a lodging house.