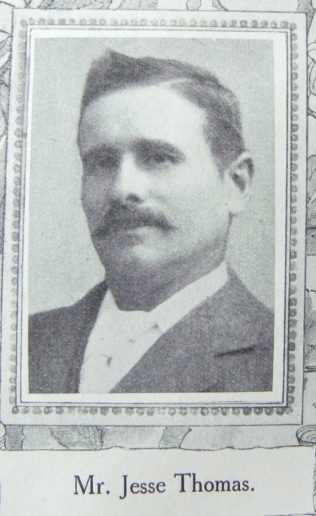 Mr. Jesse Thomas, of Breadsell Park, Battle, in the Hastings Station, has been a member and local preacher for more than thirty years. He joined our little country Society, at Westfield, where he then resided, and he still retains his membership there, though he has removed some distance away. As a farmer and cattle salesman he is often called away from home. He also represents his township on the Board of Guardians. He is, however, a thoroughly loyal Primitive Methodist, and notwithstanding the many calls on his time, he is a most regular and devout worshipper at our services in the Public Hall, Hastings, and takes a deep interest in all that concerns the welfare of our Church.

For a number of years he has occupied the position of Station Steward, and has often been sent as delegate to the District Meeting. May he be long spared.

Jesse was born abt 1851 at Westfield, Sussex, to parents Richard and Sarah. Richard worked the land.

Census returns give the following occupations for Jesse.