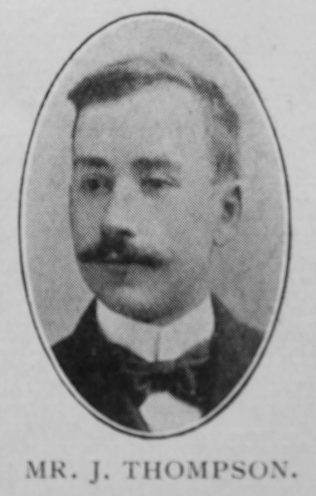 John Daglish Thompson was born at Philadelphia, near Durham, thirty-four years ago, and removed to Hirst on reaching manhood. For eleven years he served the Co-operative Society and had recently been appointed one of its branch managers.

He was converted at Hirst and for the rest of his life was a faithful member of that society. The Sunday School claimed his interest from the first, and for nine years he rendered most acceptable service as a local preacher. Earnest and thoughtful, he was ever a seeker after truth and believed that mind as well as heart should be consecrated to God’s work.

We had a conviction that the passing years would bring him a wider influence for good, but he died on August 21st, after a brief illness, and his gifts will bear their full fruit in the higher service. His sunny disposition made him cheerful even in affliction, and in his last hours he was trying to comfort those around him. A service was held in our Hirst Church prior to the interment in Seaton Hirst churchyard. Rev. W. Pickering gave an address, and Mr. W.H. Hughes also took part. The sympathies of the large company of mourners were with the widow in her loneliness.

John was born abt1878 at Philadelphia, Co. Durham, to parents Thomas Thompson, a colliery engineman (1881), and Sarah Daglish.