A PM worth knowing 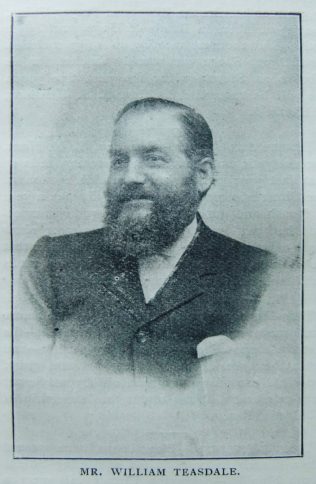 AMONGST the many leal and true Primitive Methodists in the St. Helen’s Auckland Circuit, William Teasdale, of Copley Lane, is well worthy of honourable mention. Born nearly sixty years ago, for about forty-two years he has been closely associated with our Church as a member and official. As a Class Leader, he has for over thirty years been diligent in discharging the important duties of that office. He has also delighted in work amongst the children, and for thirty-eight years the Sunday school has been an object of his care and interest, both as a teacher and superintendent. Indeed, almost every office in the church has been held by our friend, he being Chapel Steward ever since we had a cause at Copley Lane. The missionary cause has ever found him a warm supporter, and one of his greatest joys is to have had the opportunity of attending one of our great May meetings in London. The Home Missions, under the care of Revs. T.Jackson and J. Flanagan, have never appealed in vain to his generosity, while societies in his own Circuit, as well as in other neighbourhoods, often receive a helping hand. His loyalty towards our Connexional literature is above question, and to every member and official in our Zion, in this respect as in others, he is an ensample. Ever since he possessed a home of his own it has been open to the preachers, his good wife with himself offering hospitality of no mean order. Brother Teasdale is a living illustration of the truth that “there is he that scattereth abroad and yet increaseth”; for he has prospered, and is blessed with a fair portion of this world’s goods. And yet his start in life was by no means a most favourable one. His father died while he was but a lad, and at the age of ten years he was working down the mine. His opportunities for education were therefore very scanty, but sturdy determination and the grace of God have produced a man, a Christian, and a Primitive Methodist it is a privilege to meet with. He has once been asked to give up his church for another, but his grit and godliness have always been invulnerable against proving recreant to what is most dear to him. When the first chapel at Copley was built he worked for many a day in quarrying the stones for the building, and now that a proposal is on foot to erect a new place of worship he has generously offered, free of cost, the site, and also the stones for the new church. His Circuit has not been forgetful of his loyalty, and as a delegate to District Meeting he has taken his place with other worthy representatives. He has also been Parish Councillor and Overseer, which positions he has occupied with credit to himself and in the interests of the people. He is a genial Christian gentleman, and a type of Primitive Methodist who, never seeking prominence, is yet worthy a place in the gallery of the staunch and true of our Church. We can only pray that for many years to come he may be spared to the Church of his choice, and with his helpmate and family render service for Him who is worthy of the best we can put into all our living.

William was born in 1843 at Lynesack, Co. Durham, to parents John and Sarah. John was a coal miner.

William started his working life as a coal miner, but by the time of the 1871 census he was running a grocery and draper’s business.

William died on 19 June 1908 at Argyle House, Copley, Co. Durham. He was buried in Lynesack churchyard.