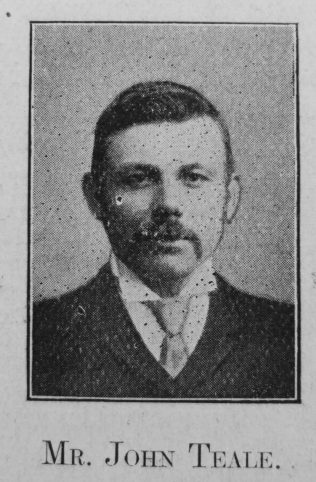 Transcription of Obituary in the Primitive Methodist Magazine by John Harrison

Our beloved brother, John Teale, was born at Holme, upon Spalding Moor, Yorkshire, in the Pocklington circuit in the year 1860, and died at Selby, October 31st, 1903, at the age of 43 years. He was very much respected in life, and in death much lamented. He has left a widow and seven children to mourn their loss. His departure was very sudden and tragic. Being a foreman platelayer, he was accidently killed, at early morn by an engine in the Selby station, while in the execution of his duty.

He was a quiet man and highly esteemed, alike both by his superiors and those under his charge. He was followed to his last resting place in Selby Cemetery, by a large number of his fellow workmen and associates in church work. The first part of the service was held in our Gowthorpe Chapel. There were several wreaths, including one from the Selby branch of the Railway Temperance Union, brother Teale being an active member of the committee. He was also the secretary and convener of the Selby Circuit Temperance Committee.

After his conversion at Holme, he joined Brother Martin’s class and was most regular in his attendance. In due course, he was appointed assistant leader of Brother Collins’ class, and for many years he filled this position nobly and well, was nearly always at his post. His presence was an inspiration and his influence marked. His class leader says: “I have known him 18 years, and for 12 years I worked with him in church affairs, and found him a ready and willing helper in every department of church work. I shall never forget the blessed seasons we have had at our Sunday morning meetings. And when his duties called him to Selby we parted with him hardly.” He was a local preacher, and his pulpit efforts were much appreciated. He was an ardent worker in the Sabbath School of his native village, was its secretary for several years, and beloved by the children and teachers. He was chapel keeper, President of the Band of Hope, and also leader of the Mission Band. He was a man of sterling worth. He contributed to the funds of the Primitive Methodist Church, according to the best of his ability. His work on earth is ended, and he has gone to be for ever with the Lord. “Blessed are they Who are Called unto the marriage supper of the Lamb.”

We hope to meet him in the brightness that knows no ending, when the day breaks and the shadows flee away.

John was born to parents Henry, a railway platelayer, and Sabina.