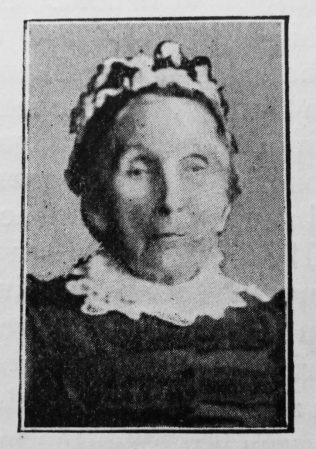 Transcription of Obituary in the Primitive Methodist Magazine by W Overton

Mrs. Turner, of Great Bridge, West Bromwich First Circuit, sister of Alfred Thomas Whitford, J.P., Northampton, was one of the saintliest persons it has been our privilege to know. For nearly seventy years she lived in fellowship with her Lord, and reflected much of the white purity of His matchless life. Born at Paulton, Somerset, September 30th, 1822, her parents were natives of Cornwall, and though of Nonconformist stock were strong adherents of the Anglican Church. One ancestor was the first to entertain John Wesley in Cornwall; another, William O’Bryan, was one of the founders of the Bibie Christian Church.

Mrs. Turner’s father, an Inland Revenue officer, came when she was a child to reside at Goldsgreen, West Bromwich, and her mother, invited to a class meeting, found the Saviour and joined the Church. When fifteen, our sister surrendered herself to Christ, and became a Sunday School teacher. Here she met Mr. Richard Turner, School Secretary, who was to her for over sixty years a devoted husband. In 1846 they removed to Witton Park, Bishop Auckland Circuit, and largely through their instrumentality a cause was established and a chapel built. They had the honour of entertaining Hugh Bourne, and their first-born, John, then a babe, and now proprietor of the Midland Temperance Hotel, Russell Square, W.C., had the old man’s hand laid upon his head and received his blessing. In March, 1860, they removed to Great Bridge, and through all the succeeding years our sister manifested the deepest interest in the welfare of our Church.

“Her children rise up and call her blessed.” “My earliest recollection,” says her eldest son, “is of sitting upon her knee while she taught me the Lord’s prayer. When I left home for London at eighteen, I was thrown into the society of young fellows in the office whose ways were a revelation of fast life to me. I should have gone down but for the weekly letters from my mother. They always caused a lump to come in my throat, and inspired me with the determination to lead the straight life, if only for her sake.”

For over three years she insisted on nursing her husband in his illness; her devotion to him was beautiful to behold. At length her strength failed and she had to take to her bed. She bore her suffering without murmuring, and was “always cheerful, loving, and never impatient.” Not long before her passing, I found her simply trusting in her Saviour, and thus she went peacefully home, April 6th, 1906. We laid her to rest in Tipton Cemetery, a service having been previously held in Great Bridge Street Chapel. An “In Memoriam” service was conducted by the writer on a subsequent Sunday evening. The service was largely attended. The choir rendered “Vital Spark”: the solo, “The Better Land,” was sung, and the sermon was based on John xiv. 2. Thus another link with the past is gone, and another with the future added.

“God calls our loved ones, but we lose not wholly
What He hath given;
They live on earth, in thought and deed as truly
As in heaven.”

Jean was baptised on 10 November 1822 at Paulton, Somerset. Her parents were John Whitford, an excise officer, and Ann.

I have not been able to identify an online marriage record for Jean and Richard Turner (1820-1907). When the family returned to the Midland from County Durham, Richard was employed as a forge manager (1851). The 1861 and 1871 census returns give his occupation as ironworks manager. By 1881 he is described as a poulterer and fruiter and in 1891 he is a retired grocer. Census returns identify nine children.