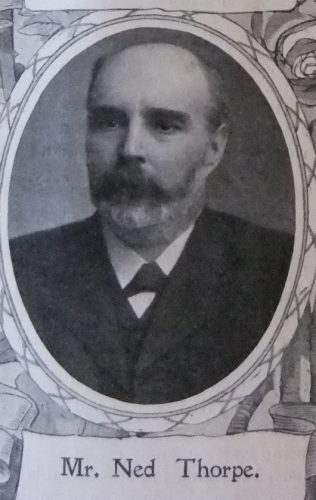 Mr. Ned Thorpe, the steward of Bradford II, is a Primitive Methodist of the third generation. His fifty years of life have been spent in his native circuit except seventeen years in early life at Scissett. There he attended our school at Clayton West, and joined our church. He has held efficiently many offices – teacher, school superintendent, trustee, leader in succession to his reverend father, local preacher, and circuit steward. Twice he has been delegate to District meeting and once to Conference. Government assessor and collector of taxes, he has exceptional business abilities which are ungrudgingly devoted to the service of the church. He is most regular in his attendance at the means of grace, and a generous helper of every good cause. In the prime of his life, we trust he may be long spared to serve the church of his fathers.

Ned was born in Bradford, Yorkshire in 1857. The 1871 census places Ned at Scissett, the adopted son of Joseph and Eliza Stephenson. Joseph was a Woollen Card Cleaner.

Ned started his working life as a bobbin winder. The 1881 and 1891 census returns record his occupation as grocer and draper. By 1901, Ned had become a tax assessor.

Ned died on 24 May 1946 at Bradford. His probate record identifies Margaret Smith Dods Thorp (1883-1964) as widow. The record of a marriage has not been identified.

Note: Many records spell the surname as Thorp.