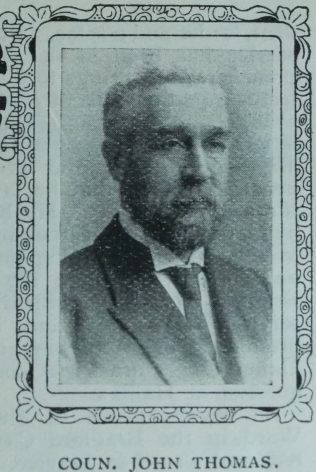 The subject of this sketch was born in 1850 at Todmorden, a district which has been prolific in producing such stalwarts of our Church as the Revs. T Newell, J Slater, and J. Travis. In his early days Mr. Thomas attended the Baptist Sunday School, and was attracted to our Church by the hearty singing in connection with our camp meeting. His conversion took place when he was thirteen years of age, and he joined the Church at once. He had the inestimable boon of a pious mother, but it was after his conversion that his father joined us, a fact which speaks well both for the young convert and his Church.

In his business as a corn merchant, Mr. Thomas has been called to live in several towns, in all of which he has allied himself with us, and served in the capacity of teacher, superintendent, leader and trustee. But his pre-eminent service has been in the capacity of a local preacher. He brings to this work rich intellectual qualities, facility of expression, the evangelistic note and enthusiasm. From letters and testimonies it is evident that he is an exceedingly helpful preacher, and it is needless to say that he is in great request through the district. He has been honoured by representing his Circuit or some committee in the District Meeting on three occasions, and he has also been the president of the Bradford Primitive Methodist Council. His service to the temperance cause include his presidency of Mytholmroyd Band of Hope Union, and a municipal contest on the drink question at Halifax.

As representative of the Great Horton Ward in the Bradford City Council he has rendered excellent service. He is only just past the meridian of life, and should life and health and strength be continued, he will be able for many years to render yeoman service to the Church and State.

John was born at Stansfield, Todmorden, Yorkshire, to parents William and Sally. William was a factory operative (textiles).

John was a weaver (1871) before becoming a corn miller and later a corn merchant.