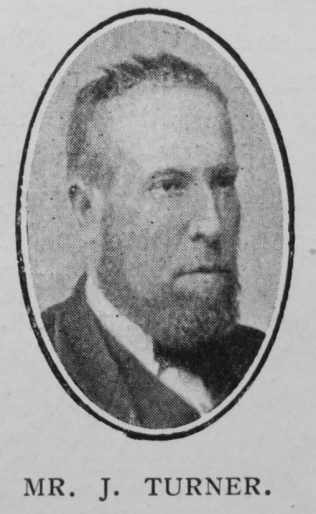 In the death of Mr. John Turner the Halstead and Great Bardfield Mission has lost one of the most loyal of its local preachers. He was born in 1846, at the little village of Duck End Stebbing. Through his mother’s prayers he was led to the Saviour, and joined the Primitive Methodists, who were missioning the district. His home was the home of the ministers, and many of them have gladly accepted the night’s lodging and cheerful hospitality of the humble home.

For over forty years he earnestly preached the Gospel, being especially useful at Camp Meetings, and only eternity will reveal the number who have been led through his devoted life and earnest  preaching to the Saviour.

During the last four years he suffered a great deal, but was devotedly nursed by his faithful wife. He was taken with a stroke on Thursday, Sept. 21st, and did not speak again, but was taken to be with Jesus on Sunday, Sept. 24th, 1911.

One incident will show the determination and perseverance of his nature. There was a debt on the chapel at Bran End of about £60, and it was proposed that the chapel should be sold. All arrangements for selling were made, and Mr. John Turner, as Trustee, was asked to sign, giving his consent to the sale. But he would not consent, but said he “would sell his clothes from his back first.” His faith triumphed, and the debt was cleared. Through the dark days in the history of the Church his faith grew stronger and never failed. His devoted wife has been appointed to his place as Society Steward. His four sons are all engaged in Christian work. He was buried at Stebbing by the Rev. J. Bailey, assisted by Rev. A.T. Ogg.