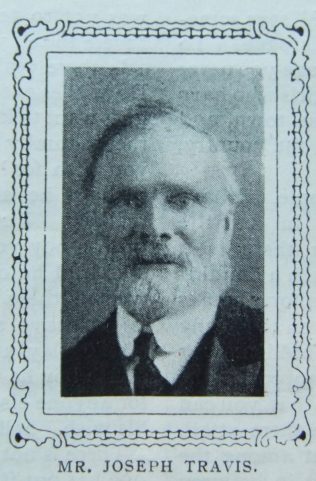 MR. JOSEPH TRAVIS bears an honoured name in our Church. He is related on his father’s side to one of our most stalwart denominational leaders. He springs from Lancashire, and was born December 16th, 1843. His early years were full of change, owing to the moving about of his parents to different parts of the kingdom. His youth was full of perils, and he speaks of these years as “dark days of drifting.”

About the year 1863 our Primitive Methodist friends held open-air services on London Fields, Hackney. He was deeply impressed by these services, which were the means of producing serious thoughts, and subsequently change of life. In a mission meeting in Goldsmith Row, Hackney, he surrendered himself to Christ. Then followed an earnest devotement to Christian work, varied and enthusiastic: in the Ragged School Mission, among the City arab, in the Port of London, among the sailors, and in other places where doors opened, to bring to the neglected the message of hope.

For this work he received considerable recognition, and possesses treasured memorials of such appreciation. In 1882 he removed from the East of London to Shepherd’s Bush, and immediately connected himself with our Dalling Road Church, Hammersmith. Here he began a course of usefulness, which, if more concentrated than formerly, has proved no less intense and influential. As local preacher and Class leader he has served with marked ability.

He has had a more than ordinary share of domestic troubles, but these have left no traces upon him, save of richness of experience and tenderness of service. He is a brother beloved. He speaks out of a heart divinely nourished.

Joseph was born at Brecknock, Breconshire. His father was Christopher Travis.

Joseph died in the spring of 1933 at Shepherds Bush, London.