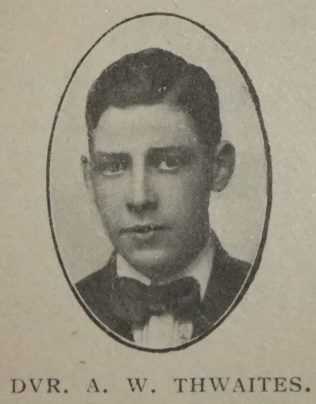 Arthur W. Thwaites was the elder son of Mr. and Mrs. A.B. Thwaites, Shepherd’s Bush, and was a devoted member and worker at Dalling Road Church, Hammersmith Circuit. As a teacher in the Sunday school and one of the secretaries of the Christian Endeavour, he rendered splendid service to the cause of Christ. When he was eighteen he was called to the colours and joined the Royal Field Artillery. In May, 1918, he was taken prisoner and put to work behind the German lines in Belgium. We hoped for his return when the Armistice was signed, but could obtain no news concerning him. After months of anxious waiting, his parents received official information that he had died hehind the German lines about the end of September 1918. At the early age of twenty he went home to God. His death is a distinct loss to our church and school. He was a fine lad, with a deep desire for usefulness in Christian service, and we entertained high hopes for his future. But his brief life was not lived in vain.

Arthur was Driver 230057 in the Royal Horse Artillery and Royal Field Artillery. He died on 30 September 1918.