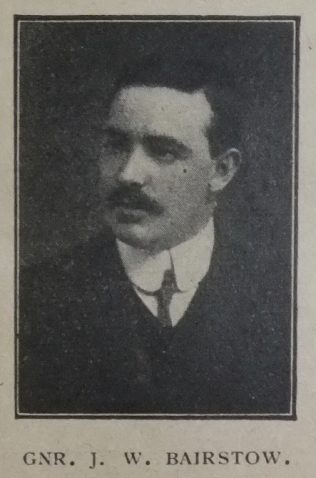 With the passing of Gunner J.W. Bairstow, who fell a victim to enteric fever, and entered into rest on Sunday, July 14th, at Amritsar, India, our church and school at Royton have lost a valuable worker, and one who gave the promise of becoming a pillar in the Church. He was cradled in Primitive Methodism, and as he advanced in years, his attachment to the Church of his parents grew also. Early in life he expressed a desire to prepare for fuller service, and he received every encouragement, and was soon a local preacher. In this work he excelled, and his services were eagerly sought by other denominations. He was a teacher in one of our senior classes, a trustee, and a very able Christian Endeavour secretary.

His Commanding Officer, writing to Mrs Bairstow said: “Your husband was a man, a good man, respected and beloved.” He is deeply mourned by his sorrowing wife, aged father and two sisters.

James was Gunner 161188 in the Royal Field Artillery.