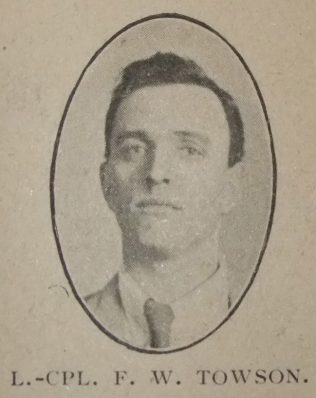 The War has claimed a very promising young man from our Upwell Church, Downham Circuit, in the person of Lance-Corporal F.W. Towson, who was killed in France on August 8th, 1918. Our friend, who was only twenty-eight years of age, leaves a young widow and two children to mourn his loss. His religious life commenced at Bardolph Fen, where he was led in his own home, by his father and mother, to surrender his young life to the Master. He joined the Church of his parents, viz., the United Methodists, but on moving to Upwell about four years ago, he associated himself with our church there. Being musical, and skilled with the violin, he and his wife often contributed musical items at the Christian Endeavour meeting. He enlisted in the Army in April, 1916, and since then had had many a narrow escape, having been wounded, and also down with trench fever. Our deepest sympathy goes out to the widow and other relatives.