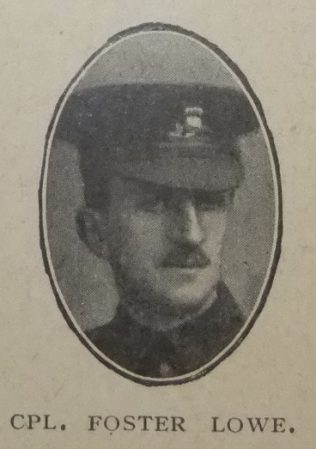 Miller Street, Primitive Methodism, Heywood, has suffered a great loss by the death of Corporal F. Lowe. For nine months he had been reported “missing,” but quite recently came the official news that he was killed in action in France on September 10th, 1916. Before his enlistment he was a devoted member and worker of the above church and Sunday school, of which he was a trustee. In the church he found a happy sphere in serving as a member of the choir. Corporal Lowe was a young man of sterling qualities, and possessed the gifts which make strong and worthy men. He was a brother of fine character, and always impressed his friends that his life was rich in those elements that make for consistency and perseverance. He had a high sense of honour, and was not lacking in courage. These noble virtues revealed themselves in the faithful Christian life which he lived.

An impressive memorial service was conducted at Miller Street on Sunday morning, June 17th, by the Rev. C. Moore.

Before the war, Foster worked as an electric car conductor.

Foster was Private 201143 in the Lancashire Fusiliers, 2/5th Battalion.