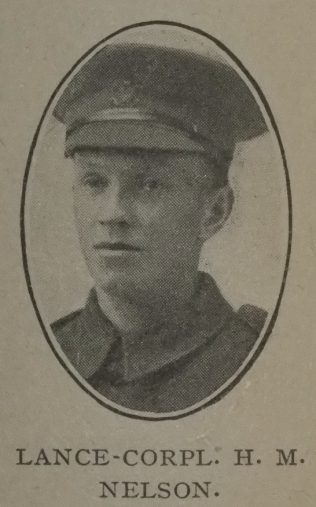 A life of unsullied goodness and rare promise came to its earthly close when Herbert Malcolm Nelson fell in France during the Cambria attack on November 20th, 1917, mortally wounded by machine-gun fire. A lover of literature and music, with keen artistic instincts, and with soul attuned to the Divine, war was ever repellent to his thinking and temperament. Yet he became one of the most efficient and trustworthy soldiers in his battalion, and only a few weeks before his death was recommended for a commission. His captain writing to the bereaved family, says, “that he was absolutely loved and trusted by every member of the gun team he was in charge of.”

From childhood he was associated with the Gilkes Street Church, Middlesborough, where as Sunday school Teacher and Local Preacher he served with efficiency and increasing power. Of an affectionate disposition and thoughtful for others, he held an abiding place in many hearts. Home Church and nation are the poorer through his premature end.

Herbert was L/Corporal B/200389 in the Rifle Brigade (The Prince Consort’s Own), 11th Battalion. He was formerly 6071 in the London Regiment.

Before the war, Herbert worked as a French Polisher.