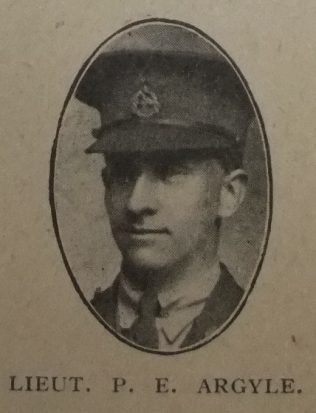 A life full of great promise has been cut short by the death “in action” on Easter Monday, of Lieut. Percival Edgar Argyle, aged twenty-seven, son of Mr. and Mrs. A. J. Argyle, of our Abingdon Church (Wallingford-on-Thames Circuit). A journalist by profession, he on joining the Colours, was selected for clerical work in the A.S.C. Soon, however, he joined the East Lancashire Regiment as a private, and obtained his commission on June 24th, 1915. In July of last year he was transferred to a regular battalion, and was just in time for the “big push” in which several brother officers and the Brigadier-General were killed. Lieut. Argyle came through the engagement unscathed, and was detailed to take charge of all that remained of the brigade until it was reorganised. In January of this year, in recognition of his abilities and work, he received promotion to the rank of full Lieutenant. He was called to make the great sacrifice “whilst leading his company with splendid valour and skill”. He has three brothers serving at the Front.

Percival died on 9 April 1917. He held the rank 2/Lieutenant (T) in the East Lancashire Regiment.