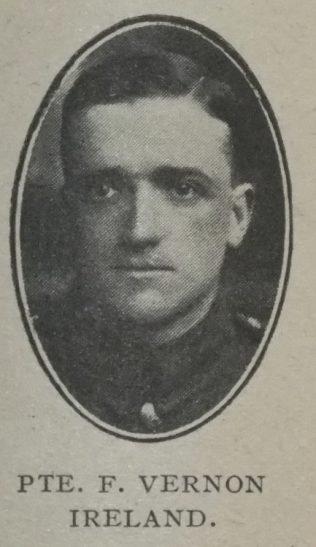 In the death of Private F. Vernon Ireland, in Oxford Military Hospital on November 13th, of wounds received in France, Peterborough 2nd Circuit, and Cobden Street Church in particular, lost one of its most devoted and promising young men.

As secretary of the Sunday school and vice-president of the C.E., he endeared himself to all by his constancy, intelligence and straightforwardness.

What splendid papers he wrote for the C.E. meeting! What method and precision he introduced to his secretarial duties! What a devoted son he was to his widowed mother!

The funeral service was held at Cobden Street in the presence of a large and sympathetic audience on November 19th, conducted by the writer.

Vernon was Private 27586 in the Border Regiment, 2nd Battalion.