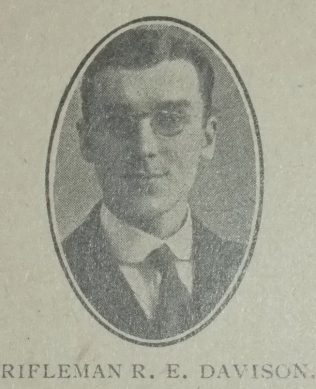 Among those who have fallen in the Great War none could be more highly esteemed than Richard E Davison, son of our General Committee Secretary, the Rev. M. P. Davison. Born at Newcastle-on-Tyne, he had reached the age of twenty-five, and from his early days manifested a keenness for spiritual things. He was never disconnected from the Sunday school and church, and at Castleford he began active Christian service. He was a great supporter of the C.E., the literary society, and a successful leader of the Adult Bible class. He was eventually placed on the preachers plan. Upon removal to London, his articles as a law student were transferred to Messrs. Rawlings, Butt and Bowyer, and he was making rapid progress in his profession, when in obedience to the call of his country, he put aside his deep feelings of repugnance to anything in the nature of bloodshed, and entered the army. He was shot down in a bombing expedition near Combles in France. A memorial service was held at Castleford, conducted by Rev. E. Clements. Our church at Harringay, London was deeply touched by the news. The Rev. E. J. T. Bagnall said they would ever treasure the memory of his noble character, and look forward to the great reunion on “the day without clouds.”

Richard was Rifleman 4678 in the London Regiment, 16th (county of London) Battalion (Queens Westminster Rifles). He was killed in action on 10 September 1916.