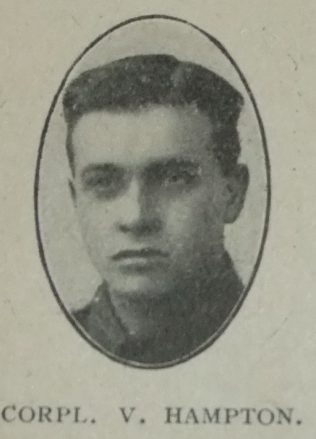 In the passing of Corporal Victor Hampton, the Queen Street Church, West Bromwich, has lost one of its best and most gifted young men. Victor was a Primitive Methodist of the third generation, and laboured untiringly as Sunday school secretary, and was the popular secretary of the C.E. Society. He joined the R.A.M.C. in March, 1916, and had put in about two years’ service in France. During this time he gained the respect and confidence of his officers and comrades. On the morning of the day he died (April 18th, 1918) he went out in charge of four stretcher-bearers, bringing in the wounded after a stiff fight, and was on his way back to the advance post when a stray shell exploded nearby and wounded him.

His colonel, writing to his parents, said that he was marked out for early promotion, but, instead of military promotion, Victor has been promoted to the higher life and larger service.

Victor worked as a clerk before the war.