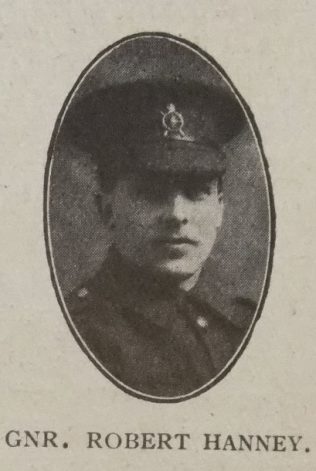 At the early age of twenty-nine years, Robert Hanney died of wounds received as Cambrai on November 22nd, 1917, while serving in the Tank Corps. He was only six months overseas when wounded, and was moved to the C.C.S., where Rev. R.F. Wearmouth, C.F., laid him to rest in a British cemetery five and a half miles West Gouzeaucourt. He was connected with the Wenlock Road Church, South Shields, from birth, and passed through all the classes. He was assistant superintendent in the Sunday school, and a local preacher. He served many churches while training in Dorset and Lincolnshire. His parents still receive letters from friends where he preached, testifying to the good they received from his ministry.

The prayerful sympathy of our people was beautifully expressed to the family at a largely-attended memorial service, conducted by the Rev. T. Shaw, on Sunday evening, December 16th, 1917.

Robert was Private 78600 in the Tank Corps. He was formerly 1594 in the Northern Cyclist battalion.

Before the war, Robert worked as a weighman at a coal mine.