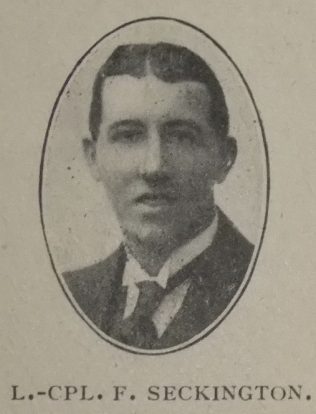 Lance-Corporal F.W. Seckington joined the colours in January, 1917, and in the March following was sent to France. He saw much service, and escaped all harm and injury until April 22nd, 1918, when he was killed in action in France. He was in his twenty-fourth year. His parents – Mr. and Mrs. Seckington – are amongst the oldest members of our Church at Harlestone Road, Northampton.

Our departed friend was beloved by all who knew him. He was a teacher in our Sabbath school, an officer of the Boys’ Life Brigade, a member of the choir, and the representative of the Trust Board to the quarterly meeting. Only a few weeks before he was home on leave. He immensely enjoyed the services, and on the Sabbath evening gave a solo “The Homeland,” in a very fine and impressive manner. Little did we think that would be the last time we should hear him sing on earth. Many expressions of sympathy have been sent to his parents, sister and fiancée – Miss Brown. In their sorrow and loss we pray the Father of all comfort to strengthen and console them.

Frederic was L/Corporal 73368 in the Sherwood Foresters (Nottinghamshire and Derbyshire Regiment), 10th Battalion. He was formerly 32054 in the Northamptonshire Regiment.

Before the war, Frederic worked as a clicker in the boot trade.