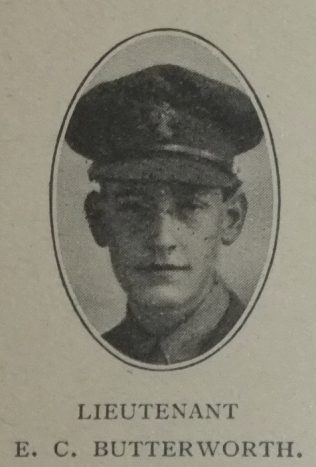 Our Bridge Street Church, Heywood, has suffered a further severe loss in the tragic death of Lieut. E.C. Butterworth, who died of wounds in France on November 21st, 1917, at the age of twenty-two. From boyhood his career was one of brilliant success. He won scholarships which admitted him to Manchester Grammar School, where he came under the influence of Dr. Paton, the Headmaster, who had a high estimation of our young brother. His scholastic attainments revealed him as a youth possessing great gifts. At the outbreak of the war he was in the employment of a well-known consulting engineer. He joined the Army as a private, but subsequently received a commission for distinguished service in the field. From childhood he was a scholar in our school, and from his youth a teacher in the primary and worker in the Church. He was noble in character, and affectionate in disposition. His father, who is an official of the Church, keenly feels the loss of his only son, and our prayers are with the family in this hour of trial and loss. An impressive memorial service was conducted in the church by the writer on Sunday evening, Dec 2nd.

Edward was 2/Lieutenant (T) in the Royal Fusiliers (City of London Regiment), 9th Battalion. He received his commission on 26 June 1917.