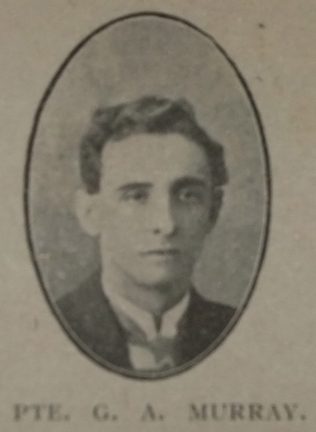 Our Church at Moses Gate, Walkden Circuit, has lost of its best young men in the passing of George A. Murray, who died of wounds in France October 14th, 1918 He joined the Army in April last, and went out to France in August. Five weeks later he was wounded and died in hospital, and his body laid to rest, with full military honours, in the cemetery at Boulogne. We have seldom met a young man so regular and consistent in attendance at the means of grace. He was a faithful member of our choir, C.E., and Band of Hope, and was deeply interested in missionary enterprises. His letters, while in the Army, reveal a deep trust and tender love for the Saviour. He loved the beautiful things in life – flowers, music, children, home, but most of all the Saviour. His name is indelibly written on the hearts of all who knew him. Our deep sympathy goes out to the widow and child in their irreparable loss. A crowded congregation attended a deeply impressive memorial service which was conducted by the Rev. L.J. Jackson on October 20th.

George was Private 53811 in the Lancashire Fusiliers, 1st Battalion. He died of wounds on 4October 1918.

George worked in the cotton industry before the war. He married Sarah Entwistle in the summer of 1913.