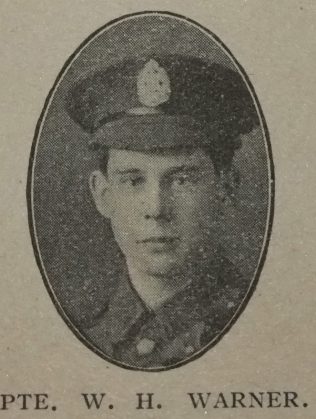 Pte. W.H. Warner, of Dalling Road Church, Hammersmith Circuit, was killed in action on August 21st, 1918. He was recommended by the Quarterly Meeting as a candidate for the ministry in 1915, but responded to the call of his country and joined the Forces. Hating was, he volunteered to fight because he loved freedom and honour and Christ with a love that was stronger than death. He was the product of our own Sunday school. As a member of the choir, Sunday school teacher, local preacher, and open-air speaker he rendered splendid service. In our own and adjacent circuits he served with much acceptance in the pulpit. Zealous and devoted, he could always be counted on to assist in any effort to reach and win men for Christ. Highly respected and greatly beloved, his death has left a vacancy in our ranks it is not easy to fill.

William was Private 26288 in the East Surrey Regiment, 1st Battalion. He was formerly 59088 in the Royal Fusiliers.

Before the war, William worked as a traveller in drapery.