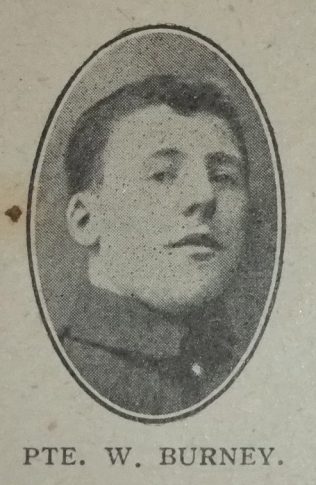 Private W. Burney was a member of the men’s Bible class, Howgill Street, Whitehaven. From childhood he had been a scholar in our Sunday school. He, with two brothers, joined the Army on the outbreak of War in 1914, and was soon transferred to France. He was killed in action. From officers and comrades his parents have received sympathetic letters speaking in high terms of his good qualities as a soldier and as a man. His two brothers have been wounded. A memorial service in our church at Whitehaven was conducted by Rev. E. Campbell.