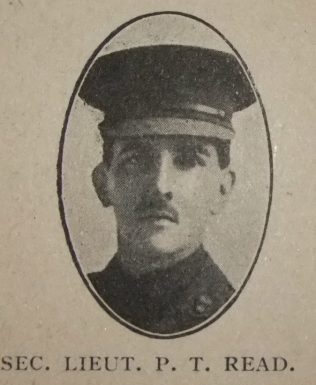 On October 23rd, 1916, Phillips T. Read was killed at the bettle of the Somme – another victim of the ghastly business of war. He was only thirty-three and life was fair and promising when it was thus suddenly cut short. By birth, tradition and training he was a Primitive Methodist beyond many. His grandparents on his mother’s side were Mr. and Mrs. G.E. Almond, two of the most generous and godly people we have ever known, and whose work and influence are still living factors in Gateshead. His father is the Rev. J.P. Read, an honoured minister of our Church. His grandmother on his father’s side was sister to the Rev. H. Phillips, a president of Conference and one of the finest men our ministry ever possessed. Another sister was the wife of the Rev. W. Towler, one of our early orators, and it was because of this connection that his second Christian name was given. He was also great-great-grandson to Mary Porteous, one of our notable female travelling preachers. No wonder that with such an ancestry, he valued his connection with Primitive Methodism. He came to Gateshead as a youth, entered Mr. Almond’s business and attached himself to Durham Road Church, of which he remained a member till his all too early death. In course of time he became managing-director of the business, and was frequently absent for considerable periods at the Glasgow branch, but his first concern on his return was always to settle his class money account with his leader. His quiet disposition kept him from more active and prominent positions in the Church. He has left a widow and four children to mourn his loss.

Phillips was 2/Lieutenant in the Royal Horse Artillery and Royal Field Artillery.

Phillips worked as a wallpaper merchant before the war.