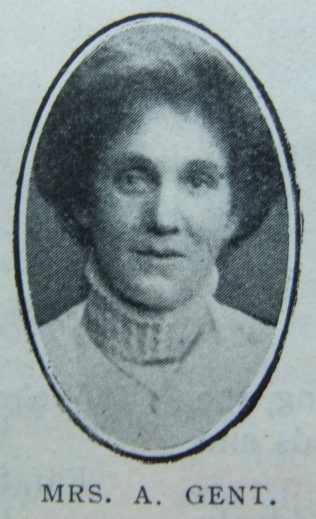 OUR little church at Golden Valley (Ripley Circuit) has sustained a great loss. Ada, the beloved wife of Alfred Gent, passed to the homeland on January 4th, 1914. Sixteen years ago, on her marriage, she came to Golden Valley a perfect stranger, but by her gracious Christian character she won the affection of the villagers. From the first she took an active part in church work, labouring in Choir, Sunday school and C.E., of which she was Vice-President. Her husband, who was a local preacher, found in her a great help; and her home was ever open to the various ministers and workers of our Church. She was the friend of the poor, the afflicted and the sorrowing, and did much to relieve the sufferings of others. Until her illness she had looked forward to a future of good service, but nearly a year ago, a throat affection gave her trouble. As it developed it proved to be a malignant growth. All that doctors skill and loving care could do proved unavailing, and after long and weary hours of untold suffering God took her to Himself at the early age of thirty-nine.

The funeral service was held in the Church she had done so much to aid in building.

It was conducted by Rev. J. Gregory (Circuit Minister) and a very appropriate address was given by Rev. H. Haynes, of Marple (formerly a minister on the Circuit).

A large company of neighbours and friends were present, and at the request of their departed sister sang  “How blest is life if lived for Thee.”

The Memorial Service on the Sunday following was conducted by Mr. John Henshaw (Circuit Steward) of Butterley Park, and was attended by a large company.

Ada was born in 1874 at Nottingham, Nottinghamshire.

She married Alfred George gent, a railway engine driver, in early 1898, in the Basford Registration District, Nottinghamshire. There were no children.