From Plough Boy to Chief Magistrate 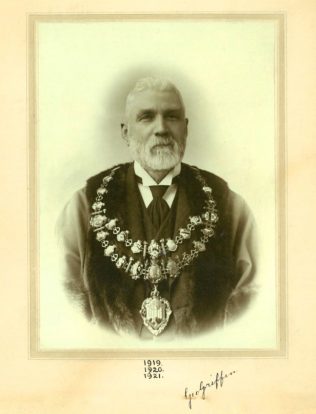 zoom
George Griffin as Mayor
with thanks to Newbury Town Council

Mr. Councillor Griffin, the new Mayor is a Berkshire man, having been born at Weston in the year 1857. He received his education at the Wickham National School, under the late Messrs. T. Wager and James Gilkes. Leaving school early, as was the case in those days with most country lads, he entered the employ of Mr. J. Munday, of Elton Farm, and subsequently that of Mr. James Palmer, of Weston Farm. Weston, however, did not offer him the future which accorded with his aspirations, and so he transferred himself to Newbury 45 years ago, taking a subordinate place in the business of Mr. Charles Saunders, pork butcher and fruiterer. In course of time he rose to the position of manager, and some 28 years ago, on the retirement of Mr. Saunders, he purchased the business.

For some 15 years Mr. Griffin one of the overseers for the Borough, and six years ago entered the Town Council. His capable business habits suggested his appointment on the Finance and General Purposes Committees; he has also served on the Sanitary and Allotments Committee.

From early days, Mr. Griffin has been connected with the Primitive Methodist Church, in which he has been an active lay preacher, in addition to which he has held several responsible positions.

The Mayoress has also been a diligent church worker, and since 1903, has been President of the Women’s Own. Of the four sons, three are engaged with their father in his business; all of them have, however, served their King and Country in the ranks, and one returned home badly wounded. The youngest son, a lieutenant in the Berks., regiment, was killed in France. His premature death was a great grief to his parents.

The new Mayor has displayed an interest in public affairs, he has been a successful business man, and may be depended on to use his influence on the side of all that appertains to the well-being of his fellow citizens and the welfare of the borough at large.

FROM PLOUGH-BOY TO CHIEF MAGISTRATE

Few people were held in such high esteem as Mr. George Griffin, whose death took place in the early hours of last Monday morning, at his residence, “The Acacia”, Craven-road. When three years ago, ill-health compelled him to retire from civic work, sincere regret was felt, for he had not only endeared himself to his colleagues on the Town Council, but by his unostentatious manner, and his homely and genial personality he had gained the respect and affection of the whole town. His illness was a great trial which he bore with fortitude, and he did not let his interest in public matters wane, although he realised that he was destined to take no further active part in them. The death of his devoted companion, Mrs Griffin, only two months ago was a blow from which he never recovered, His passing was a peaceful one.

Mr. Griffin was 75 years of age. He was always proud of his humble beginning in life, for at the age of seven he started work as a plough boy. He was born at Weston in the Lambourn Valley, and was only at the Wickham National School for a very short time. When but seven years of age he entered the employ of Mr. J. Munday of Elton-farm, and subsequently he worked for Mr. James Palmer, of Weston-farm. He used to recall days when he had to work hard for long hours, and his earnings were 3/6 a week. Weston, however, did not offer him the future which accorded with his aspirations, and so he moved to Newbury 48 years ago, and became an assistant in the business of Mr. Charles Saunders, pork butcher and fruiterer, at the Bridge. By dint of perseverance, he rose to the position of manager, and in March, 1891, on the retirement of Mr. Saunders, he purchased the business and with the aid of his sons, it has been run on most successful lines ever since.

In 1912, Mr Griffin came forward as a representative of the West Ward on the Newbury Town Council. He quickly made good. He became a popular figure, for he did not allow the limelight of public service to spoil his natural and unassuming sincerity. When elected to the position of Mayor of the Borough in 1919, which office he accepted with no a little hesitancy, he remained just the same, and at the end of three years, he vacated the civil chair, with the satisfaction of knowing that he had earned the goodwill and gratitude of all classes of the community. He was particularly loved by the school children, whom he and his wife generously entertained each year to a summer treat and so he earned the title of “The Children’s Mayor”. He always upheld the dignity of the position he accepted, and his pleasant manner helped to dispel any difficulties that arose, but the secret of his success was that he was conscientious to a degree and never made any pretence to pose as anything but his modest self. One of the outstanding events during his Mayoralty was the erection of the town War Memorial, which Mr. Griffin had the honour of unveiling.

Mr Griffin was for some time Chairman of the Allotments and the Public Health Committee, and in 1928, he was raised to the aldermanic bench. For some 25 years she served as one of the overseers of the Borough, and he was a Borough Magistrate from 1922 until the time of his death.

The Methodist Church will suffer a great loss by his passing. Both Mr. and Mrs. Griffin were life-long Primitive Methodists, and indeed their whole family have been and still are, active workers in the Church. Mr. Griffin was a local preacher for 58 years, his preaching appointments being mainly in the villages around Newbury, where his presence was always welcome. In addition he held several responsible positions in local church life. He was married at the Bartholomew-street Church on September 21st 1879- the present church having been built two years- Mrs Griffin being the fourth daughter of Mr. and Mrs. George Morland, of Bucklebury, and their golden wedding was celebrated three years ago.

Mr. Griffin is survived by four sons and one daughter (Mrs. G.E. Slater). He had five sons, all who served in the Great War, the youngest Hedley Griffin, who took a commission in the Royal Berks Regiment, succumbing to wounds received in action in France.

The funeral takes place tomorrow (Friday) the service at the Methodist Church, Bartholomew Street, being at 2.30, and the interment will be at the Old Cemetery, where Mrs Griffin was buried.

Loss to the Public

Deaths of two public men who have done much for the town and district have to be recorded this week. They were in different walks of life, but both were imbued with that spirit of fairness and integrity which makes English public life and example to the whole world.

Mr George Griffin was a “son of the soil.” At seven years of age he had left school and was working as a plough boy. He finished life as the proprietor of one of the most prosperous businesses in the town, after having been Mayor for three years, a Justice of the Peace, an Alderman of the Town Council and a Primitive Methodist local preacher for 58 years.

He was popular with all classes by reason of his unassuming simplicity and sterling honesty.

Mr. Griffin was a pork butcher by trade, and his sausages had much more than a local reputation. Many visitor to the races always made a point of stopping their cars and taking supplies home with them.