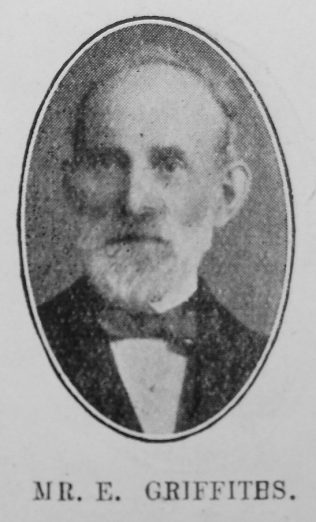 Transcription of Obituary published in the Primitive Methodist Magazine by W. Bennion

The Clowes Memorial Church, Burslem, has suffered a loss in the removal of Bro. Edward Griffiths to the “Homeland.” He was born at Market Drayton, Salop, in the year 1830. His parents being connected with our Church at that place he became a scholar in the Sunday School and in early life realized the forgiveness of sins. Seeing in him the promise of usefulness the officials of the circuit placed his name on the preacher’s. plan and at the age of nineteen he was deemed worthy to take the regular appointments of a travelling preacher whose health had failed.

In 1850 the family removed to Burslem and our brother joined the then Church in Navigation Road, with which Hugh Bourne had been closely connected. Here he was soon appointed a class leader. He was also a Trustee of the Zoar and afterwards of the present Clowes Memorial Church. But his great work was among the young people. For many years he was co-superintendent with the late Mr. John Wade and for fifty-two years he walked in the procession on the anniversary day. In all his religious work he was assisted by a devoted wife who died a few years ago and whose name is still “as ointment poured forth.”

During his affliction, which lasted about five years, he was tenderly nursed by those who loved him and when visited delighted to talk of the Leaders of our Churches in these parts and of a time coming when he would join them in the heavenly world. His faith in God was strong and when the end was drawing near he often repeated “Jesus, Lover of my soul, let me to Thy bosom fly.” On the 24th March he fell asleep in Jesus at the ripe age of seventy-eight years. A large number of friends attended Clowes Memorial Church on the following Sunday, when the first part of the funeral service was conducted by the writer, and followed to the Burslem Cemetery where the remains of our brother were placed near to those of his departed wife. May the sorrowing members of his family meet him in the “Land that is fairer than day.”

Edwin earned his living as a bricklayer.

Note: The forename is Edwin rather than Edward as printed in the obituary.