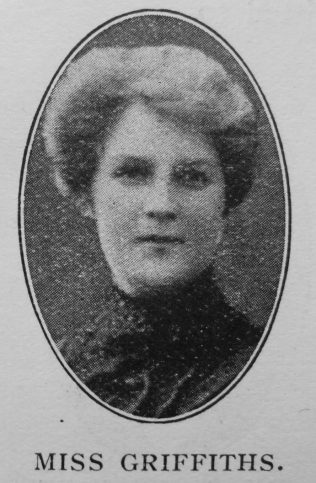 Transcription of obituary published in the Primitive Methodist Magazine by L.J.J.

Our Society at Old Churchstoke, Bishop’s Castle Circuit, has sustained a heavy loss in the passing of Miss Bessie Griffiths. Born at Old  Churchstoke, May 13th, 1890, at an early age she became a scholar in our Sunday School, and a member of the Church about six years ago.

She was a devoted teacher and secretary of our school, and Church organist. Though called to suffer much, she ever manifested a winning cheerfulness and a sunny optimism, facing a terrible ordeal with fortitude and courage.

She obeyed the call to the higher service on March 9th, 1911, and a few days later was laid to rest in the quiet little Churchyard at Churchstoke. Her life was short, but she “lived in deeds,” and left the rich, fragrant memory of a good life. Rev. L. J. Jackson conducted a memorial service on Thursday, March 16th.

Bessie was born on 13 May 1890 at Old Churchstoke, Montgomeryshire, to parents Samuel Griffiths, a general labourer (1891), and Sarah Frances.