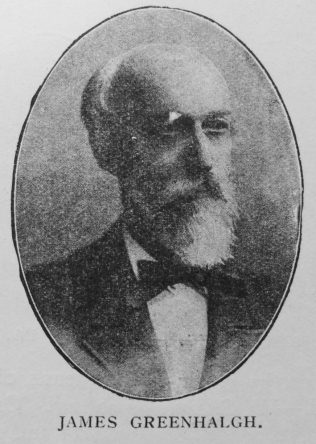 Transcription of obituary published in the Primitive Methodist Magazine by W. Windsor

Mr. James Greenhalgh was a Primitive Methodist of proved loyalty and devotion. Born at Tonge near Bolton on July 22nd, 1840, he became a member of our Church in September, 1856, and a local preacher on full plan when but seventeen years of age. To the influence of his mother, a woman of unaffected piety, he attributed his earliest religious impressions. Before her marriage to his father she was the widow of one of our early preachers, the Rev. Richard Gibson.

In 1858 Mr. Greenhalgh became a hired local preacher in his native Circuit, and subsequently received a call to the ministry. Circumstances at home prevented his acceptance of the call. After leaving Bolton he was connected with the denomination in Salford, Woodley, Chester and Halifax. In Salford he spent the most strenuous years of his life. He was then in the maturity of his powers.

As a circuit and church official and a local preacher he was held in the highest esteem. His preaching then, and to the end of his life, so long as he was physically able to fulfil the duty, was most acceptable. He had a clear apprehension of Christian doctrine, deep Evangelical convictions, an orderly method of presenting his ideas, and a style of address which was at once lucid and quietly impressive.

In business meetings his intimate knowledge of Connexional rule, his wide experience and sober judgment were of great service. For more than twenty-six years he was one of our Connexional Auditors, being associated in that office with a number of well-known and highly respected laymen, among whom was the venerable Thomas Bateman.

Mr. Greenhalgh for many years took a lively interest in District affairs, and was delegate to the Conferences sitting at Nottingham, Leicester, Scarborough, Hull, Scarborough (second time), Chester, Leeds, and Leicester (second time). He died at Halifax on Mar. 29th, 1911, and his remains were interred on April 1st at Brooklands Cemetery near Manchester.

He married Elizabeth Jane Garner (1842-1921) in the summer of 1865 in the Stepney Registration District, London. Census returns identify one children.