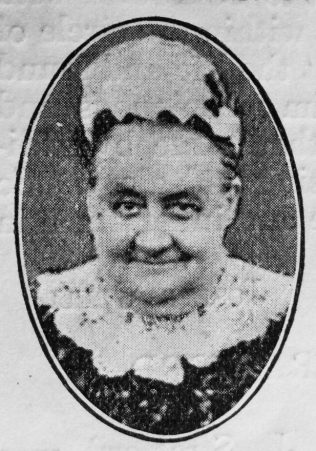 Sarah Jane Green, beloved wife of Mr. John P. Green, Cambridge Road, Leeds, was born at Sancton, near Market Weighton, sixty-seven years ago, and departed this life October 7th, 1907. There were seven children in the family, and with the low wages of an agricultural labourer she early learned lessons of carefulness in management that marked after years. The home life was religious and most of the children are found in the way of Life. She joined the church in her native village, and had an unbroken membership, spent mostly in Leeds, of forty-six years.

Active in the work of the church herself, she did much by preparation and sacrifice to increase the opportunities for her husband’s usefulness. A woman of tender sympathies and sound judgment, friends and neighbours often sought her counsel. In days of pressure she was never without a suggestion, which invariably brought relief. Her forty-eight years of married life, as she brought up her five children in the “fear of the Lord,” were rich in devotion and true happiness. For a few years, through failing health, she had been aside from the activities of the life of the church which she loved so much, but her interest was keen to the last. She was one of a few who carried their religion from their village to the great city, and helped to found this church at Meanwood Road.

Her unfailing interest and devotion, her quiet and unobtrusive piety, her sound common sense, her untiring energy and cheerful sacrifice have won honour for the church and her Lord. Her memory is fragrant and inspiring. Praying for patience in pain, she passed away after a brief illness in the quiet but joyful assurance of her Saviour’s presence.

Sarah was baptised on 17 December 1840 at Sancton, Yorkshire. She was born to single mother Hannah.

She married John Piercey Green (1843-1914) in the summer of 1860 in the Beverley Registration District, Yorkshire. Census and birth records identify six of seven children.

John was an agricultural labourer at the time of marriage to Sarah Jane. When they moved to Leeds he became a leather dresser (1871, and later a baker.