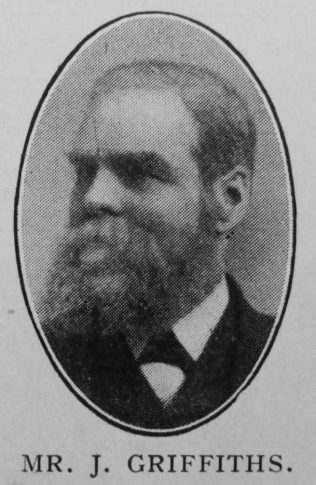 Transcription of obituary published in the Primitive Methodist Magazine by W.A. Nicholls

Mr. John Griffiths, of Essington, passed peacefully from earth to heaven, December 26th, 1911, in his eightieth  year, and by his death the society has lost its oldest member. Born at Worcester, he was left when quite a child without parents, and was brought into the Darlaston Circuit. At the age of seven he was bound apprentice to the coal-mining, under which he laboured for sixty-five years. In his fifteenth year, when all alone in the coal mine, God Almighty spoke peace to his soul, and from that day he was one of the most loyal workers Primitive Methodism has ever known.

For over sixty years he was at home in the Sunday School. A lay preacher for over sixty years, he was always welcomed in the pulpits of his own and other churches. A great soul-winner, he excelled as a sick visitor and class leader. He served as delegate to the Ludlow District Meeting and to the Chester Conference.

As usual he went round his family on Christmas Day, and on December 26th the angel of death touched him, and took him to the reward of his labours. On December 30th his remains were carried into our church, when a short service was held conducted by the Revs. F.H. Brown and B.B. Farlow. On January 14th, when he was planned to preach at our church, Mr. James Beddows, of Bloxwich, preached his memorial service. Our prayers are for those who are left to mourn his loss.

John was born abt1832 at Bromsgrove, Worcestershire. His father was named William, a farmer.